Hass avocado production in the Tristate area could be double that of last year, when it begins harvesting in August.

Avocados Australia board member and South Australian grower Kym Thiel says the industry is expecting a bumper harvest this year across Australia, and while the region is coming off a low base last year, production should still be well up in the region.

"We are certainly expecting an increased harvest in the Tristate area," he said. "It's probably 30-40 per cent up on average, but the double is coming of a really low base, which was a result of heat the year before and the trees are just rebounding. There has been increased planting from both new and existing growers, but most of the increase will be due to crop load." 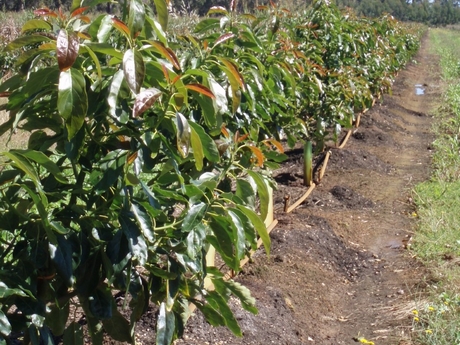 However, Mr Thiel, who is Partner/Manager at Golden Hill Packing Pty adds that rather than large-scale plantings in the hundreds of hectares, the region has experienced a few small/medium properties of around the ten-hectare average, setting up or expanding.

Flowering in the Tristate region, which encompasses the New South Wales, Victoria and South Australian border, began throughout September-November.

"We've certainly had ideal setting conditions, which have led to the bumper harvests that we are coming up to," Mr Thiel said. "The fruit is slightly blemished, because we have picked up a bit of wind throughout spring, and early summer. The heat has made it testing and trying, but to hold the crop we have is a good result."

He says the growing conditions mean that quality-wise consumers should expect a "good-eating" quality piece of fruit.

"In the Tristate we have had an extremely dry summer and dry autumn," Mr Thiel said. "Providing all growing conditions remain equal between now and harvest we should have some really good quality fruit."

The South Australian Riverland region could also be supplying small volumes of avocados into the Japanese market, after Western Australia sent some fruit for the first time last year.

"It is well positioned to service the Japanese market due to its area freedom," he said. "I know exporters in the region are looking at the market, and it is now a matter of making it work. All going well there will be fruit exported out the Riverland region this year, although at this stage I can't guarantee it. The Japanese are health conscious, especially with food safety and fruit quality. So, they certainly like Australia's clean-green image. Japan is a significant market for citrus from the Riverland and it would be really good to piggyback off of that for the avocados."

The food service industry is another expanding area of opportunity for growers, especially being able to make the most of "B-Grade" fruit.

"Everyone knows you don't eat the skin of an avocado," Mr Thiel added. "So, internally, providing it doesn't suffer from rots and wounds there's basically no difference between blemished and perfectly looking fruit. A lot of that fruit ends up in the food service, where it is cooked with and used in restaurants, or corner-shop style greengrocers. That market has been extremely strong for a number of years now. So maybe consumers are becoming educated where they can go in and get a good understanding that this fruit is perfect eating inside."

Nationally, avocado growers are expecting 8 million more kilograms of Hass avocados to hit supermarket shelves this season compared to last year. The nine per cent increase on last year’s crop from 87,000 tonnes to 95,000 tonnes, with the season running from April 2019 to March 2020.