"The Belgian pear market is catastrophic at the moment”

In 2015, Kris Wouters started growing QTee pears in his orchard in Rummen, Belgium. He started growing the new variety besides his Conference pears to increase the diversity of his production.

Kris has been active as a fruit grower since 1985, when the first cross between Williams and Coloree de Juilliet produced the Celina pear. QTee is Celina’s brand name. Years later, in 2011, Kris bought 50 per cent of the licence for the production of this pear. The other half is owned by the ABCz Group. 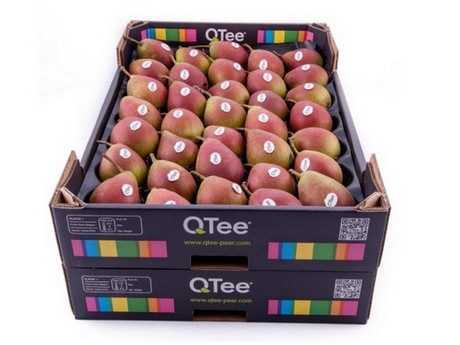 In recent years, the QTee pear’s area has grown considerably. Last year, Kris harvested an area of 125 hectares of QTee pears in Belgium. New areas are also planted in other European countries, such as Slovakia, Norway, Switzerland and Spain. New areas are planned for France, Italy and Austria. Outside of Europe, in South Africa, Australia and Morocco, areas have also been planted with QTee. In total, about 550 hectares are now available. Trees can start producing in their second year.

It’s not surprising the pear is also grown in South Africa, considering QTee shares a lot of similarities with Forelle. They both have red blushes and a smooth skin. QTee is the only red-blushed pear in the Northern Hemisphere.

“Last year, we harvested about 3,500 tonnes of QTee pears; we suddenly had a large volume we needed to sell. QTee’s advantage is that they can be picked 16 to 18 days earlier than Conference, although their shelf life isn’t as long (they can be sold until mid-November). Fortunately, sales were good in 2018. The large sizes went to supermarkets in the Netherlands, Belgium, Sweden, the UK and Germany. However, we had a lot of smaller sizes last year, because yields of the trees were enormous. We fortunately managed to export these to the Middle East, although it wasn’t easy. That region isn’t that fond of new products. That’s why we don’t sell our Conference pears on that market. QTee, however, has as its benefit that it looks a lot like pear varieties consumed in the region, so we managed to sell QTee there, albeit with a little difficulty.” 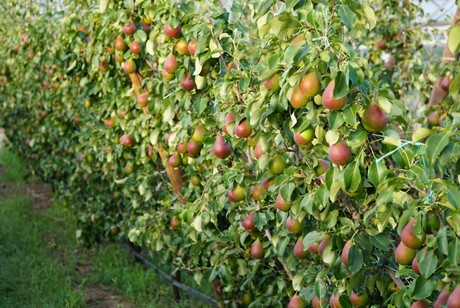 Kris mentions QTee is ideal to also sell some Conference pears in the Middle East: in total, Kris exported his harvest from last year to 21 different countries. Kris isn’t sure yet what this year’ll bring: “This year is currently the opposite of last year; the weather is extremely cold. We’ll therefore have to wait and see what’ll happen. If everything goes according to plan, we’ll have a harvest of 3,000 to 4,000 tonnes of QTee pears. However, we’re dependent on the weather, and that once again became obvious when hail, among other things, caused damage to the area.”

It’s not going as well with the Conference pear. That wasn’t the reason Kris started to switch to a new pear variety, though. Once upon a time educated as a master of agricultural science, Kris saw the danger of growing just one variety for mostly one customer. “We’d already seen with Jonagold that all good things must come to an end. It went well with the Conference for a long time, but that naturally couldn’t last forever. That’s why I started looking for an alternative to Conference quite early on. More and more fruit growers started planting more and more Conference as well, the market was good, after all. That changed because of political circumstances, however: the boycott of Russia, one of the largest sales markets for the Dutch and Belgian pears. The market now has too much supply of pears.” Although the boycott was implemented in 2014, inspections on import products in Russia became stricter in recent years, and the market is currently closed for countries affected by the boycott.

It’s also difficult to find a replacement market: “It’s very difficult to replace this market. We have seen demand from Brazil and China increasing, but that’s a very gradual process, and it’s not enough to balance out demand with the supply of Conference in Europe.”

However, Kris doesn’t just mention Russia as the guilty party for this catastrophe on the pear market. In his opinion, the EU is partially to blame for the conditions on the current market. “A lot of the growers sell their pears for prices lower than cost price, and they have hardly any reserves left. This is partly because of the policy the EU outlined years ago. For example, subsidies were sent to Eastern Europe when they first joined the EU. The purpose was to make these countries self-supporting in their fruit production. That went too far, though, resulting in an oversupply on the market. The EU’s idea to adjust supply to demand might’ve been a good idea, but the execution had the opposite effect: a market of demand and supply that’s completely unbalanced. And then there’s the Russian boycott, the price of which is being paid by the agricultural sector in general, and the fruit production in particular. If the car industry in Europe had been affected by the sanctions, the EU would’ve done something much earlier than is the case now.”

Kris is pessimistic about the future of the fruit production sector in the Benelux, and that’s personally for him, particularly in pears. “I always had more with pears than with apples. Pears just need more attention. It’s not just that, pears are easier to grow in Northern Europe than around the Mediterranean, where the climate’s better for apples, which is hard to compete with for us. Looking at apples of the same quality as in Northern Europe, they can be grown cheaper in Poland.”

Factors like the weather and political decision-making therefore have a lot of influence on the production of fruit.With the QTee pear, Kris managed to respond to major challenges in the pear sector in good time. However, it’s not just up to the fruit production sector to find a solution.