The government of Kenya’s Nyandarua county and two multinational companies have signed a deal that will see establishment of a potato cooling plant. The establishment of the facility is aimed at reducing post-harvesting losses in the region.

According to details of the memorandum of understanding signed between BASF, one of the world’s leading chemical companies, IPR Consulting Establishment and the county government, farmers in the region would be able to store their produce in a state-of-the-art cold storage facility to be established at Ol'Kalou. The cold storage warehouse will be part of an Agri-Hub that will also comprise agricultural production and a fruit and vegetable processing facility. 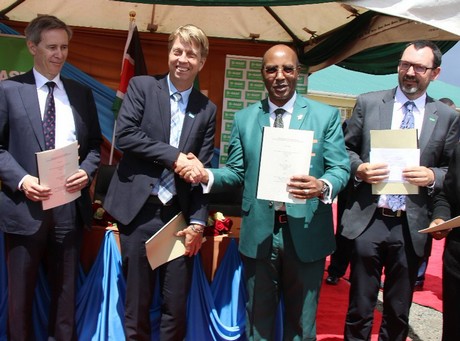 Energy requirements for the Agri-Hub will be provided by a solar energy generator, with battery storage from BASF’s New Business division. BASF Vice-President for Africa Michael Gotsche, who led the delegation, said the construction work for the Agri-Hub project would commence in October.

The delegation visited Nyandarua Governor Francis Kimemia in his Ol’Kalou office. Kimemia hailed the new development, noting that the project would go a long way in boosting potato farming: “We do not have even a single cooling facility for our potatoes and hence a lot of the produce goes to waste when there is potato glut. We appreciate the new initiative by our partners.”