After slow start, watermelon volume is ramping up in US

The US watermelon season has made a good start in terms of production, with Florida's fruit quality reportedly high, despite some minor disease pressure. Imports of Mexican fruit were slow to get started but supply has rallied and are now strong.

"We are finally getting a good flow of watermelons now after a slow start in Mexico and some disease pressure which affected yields in Florida," noted Scott McDulin of Schmieding Produce. "Due to cooler March weather in Mexico coupled with some border issues we didn't get the expected supply from Mexico until the middle of April. In Florida, the early crop has experienced some disease pressure affecting yields and size, but quality and supply from both regions is rapidly improving."

McDulin said that more regions will gradually be opening up as summer approaches, with volume expected to increase in June. He added that Schmieding Produce is poised to ship 6,000 loads of watermelons between April and September. "Currently, production is centered in South Florida, but we will be cutting in Dunnellon just north of Tampa from May 20. After South Florida, North Florida and Georgia will start up in June and we anticipate strong supplies in the lead up to July 4 and throughout the summer." 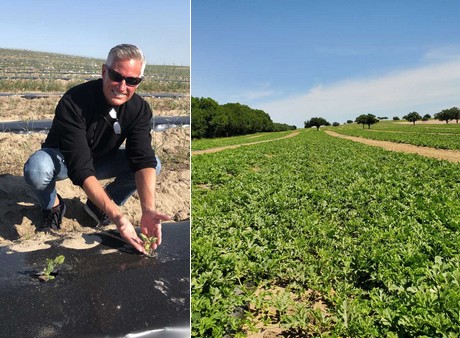 Scott McDulin in the Dunnellon field on March 9, and the same field this week

Persistent cool weather causes weaker than expected demand
While supplies of watermelons are improving daily, the market has been softer to start the season. Demand has been affected by generally cool weather conditions, especially in the northern half of the United States. Cooler and wet weather discourages people from pursuing outdoor activities. Watermelon sales increase when people are enjoying more outdoor fun with watermelons.

"It's been a slower start for the watermelon season because of the weather in the north," McDulin observed. "Costs have been adversely affected, especially on Mexican melons. Florida has largely been able to maintain their pricing because there hasn't really been an oversupply of fruit entering the market as yet. With crimple leaf and vine decline virus affecting Florida's watermelons, we are seeing a little smaller size profile with more 60 counts, putting downward pressure on that market. Supplies and quality of 45ct melons are good, but there has been an uptick in the smaller sizes. Prices out of Mexico are a little lower than they were at this same point last year."

He said that with quality improving and the fact most retailers are behind on sales, he predicts strong ad campaigns to finish May. "Retailers have some year to date volume deficits to overcome so we have a decent ad calendar set up for May and we are starting to see more traction as a result. With excellent quality fruit coming through now, we are hoping to finish May strongly." 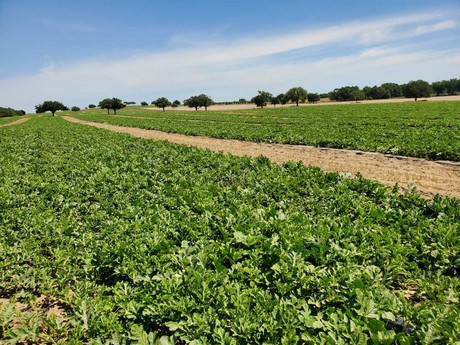 Increase in "Love bugs"
One of the challenges Florida growers face each year is the presence of "Love bugs". These insects are not harmful to watermelons but they need to be managed in order to prevent them entering into shipments to customers. This year, there appears to be more of them around, adding a little extra work for suppliers.

"Something that we are all battling this year in Florida are the Love Bugs," McDulin shared. "They are present every year, but they seem to especially thick this year. They are harmless but you have to take precautions to make sure they don't enter bins and trucks. It's something we deal with every year so we have the necessary protocols in place. This week has been much better so we hope the worst is behind us."

Presence of fresh-cut watermelons increasing
McDulin concluded by noting that retailers are increasingly stocking fresh cut fruit, including watermelons. He sees this part of the category continuing to grow rapidly as consumers look to seek out both healthy and convenient options in the produce aisle.

"Fresh cut watermelons in supermarkets are becoming more popular," he said. "This added value package is both convenient for customers and profitable for retailers creating a win-win scenario. Consumers are willing to pay more for the convenience as they see the value in saving time to enjoy a healthy snack."