A new type of Fanta is now available: Fanta Blood Orange No Added Sugar made with the juice of PGI blood oranges from Sicily checked by Consorzio di Tutela Arancia Rossa di Sicilia IGP. The new product was presented at TuttoFood, the international fair dedicated to food & beverage in Milan.

With this blood orange flavored Fanta , the Coca-Cola company, which has been producing in Italy since 1927, confirms the strong bonds that links it to our country celebrating one of Italy's excellences.

"We dedicate great attention to the Italian territory and that is why we want to promote the country's raw materials as much as possible. Fanta Aranciata Rossa is our homage to Fanta's Italian origins, as it was invented in Naples in 1955 and is still made using the juice of 100% Italian oranges," explained Cristina Broch, Director of Communications and Institutional Relations for Coca Cola Italia. 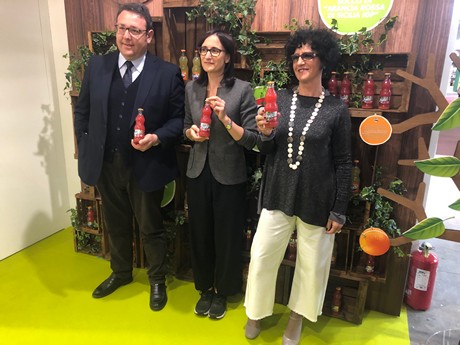 "We are proud the Blood Oranges from our amazing territory are the protagonists of this launch. It is the first time that the product of a large multinational features the PGI mark on its label. Blood oranges are grown in the eastern part of Sicily between the Catania, Enna and Syracuse provinces, in the land surrounding the Etna volcano. The nature of the soil, the climate, the diverse temperature range and the sunlight mean this product is truly unique with a high quality," added Giovanni Selvaggi, President of Consorzio di Tutela Arancia Rossa di Sicilia IGP."

The particular attention Coca Cola reserves to domestic citrus fruits is reflected in the choice of using the juice of 100% Italian oranges, meaning it purchases over a third of the Sicilian oranges destined to the processing industry. The orange juice concentrate is purchased exclusively from five Sicilian suppliers who have been working with Coca-Cola for decades.

The international role of the company means that over half of the juice purchased by Coca-Cola in Italy, just like it happens for apple, pear or lemon juice, is used to produce various beverages made by The Coca-Cola Company in Europe, thus contributing in a positive way to the export of the most appreciated raw materials.

The figures reflect the importance that the citrus fruit chain has for Coca-Cola, a strategic segment the company pays much attention to.

"We have been working hard to produce a beverage using the juice of PGI Sicilian oranges ever since 2014, when we started working with Coca-Cola on various projects for the growth of the Sicilian citrus fruit chain. We have illustrated how our chain and consortia work and can now proudly say that we were part of the process that led to the production of this type of Fanta. We hope this choice can set an example and promote our productions more as, in addition to the PGI mark, also boast a PDO mark," explained Federica Argentati, President of Distretto Agrumi di Sicilia.

Fanta Blood Orange No Added Sugar with the "Juice of PGI Blood Oranged from Sicily" is available in 25 cl glass bottles and 66cl and 1 L 100% recyclable PET bottles.