Record temperatures, devastating storms and drought-related pest infestations have prompted the apple and pear industry to call for a government-subsidised National Netting Program.

Led by APAL, state members, federal members, and candidates are being lobbied to:

Worth over $632 million per annum to the national economy, the apple and pear industry has historically received little or no financial support from government.

In the past 12 months, orchards have endured severe hailstorms in South Australia and Orange, extreme heat in the Goulburn Valley, and nation-wide bird and flying fox infestation driven by lack of feed during the drought.

“Netting protects crops by providing shade against heat, and as a barrier against hail or frost, and a humane deterrent against flying foxes and birds,” Turnbull said. 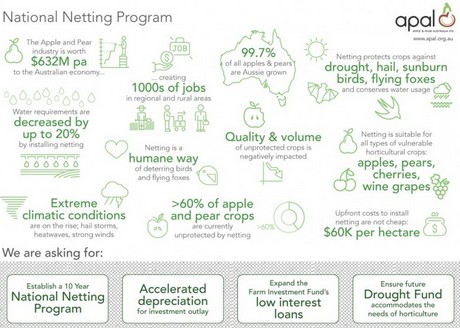 He also said netting could reduce an orchard’s water requirements by up to 20 per cent through reduced evaporation.

Turnbull said the sole downside of netting is the upfront costs to growers: at up to $60,000 per hectare, this is prohibitive to all but the largest growers.

“The nature of our industry is such that most orchards are small, family-owned businesses which limits their ability to readily access capital, and as such, there is a legitimate role for government involvement.”

With the majority of orchards not currently protected by netting, the need to improve yield and protect quality will become even more important as Australia seeks to open new export markets, including China.

APAL is encouraging growers to reach out to their local members to support for this Program. If you are a grower and want to help, download this template to create a letter to send to your local MP.