Remember how last year Wendy's, the US's third-largest fast-food burger chain, said it would only be sourcing vine-ripened greenhouse-grown tomatoes for use in its US and Canada locations? It seems they've succeeded: This year they are promoting their new burgers with 'greenhouse-grown' tomatoes. 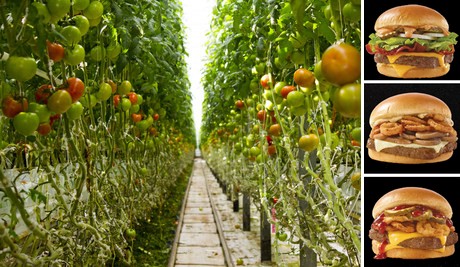 Tomato supply transition
Greenhouse grown has been made into a quality label by the burger chain. Last year they announced they wanted to transition their tomato supply to vine-ripened tomatoes, exclusively from greenhouse farms. "Driven by our commitment to provide the freshest, highest-quality food possible for our customers", they explained, stating it is a first-of-its-kind sourcing strategy for a U.S.-based, quick-service restaurant of Wendy's scale.

A dozen suppliers
According to an earlier release, the tomatoes for Wendy's are grown in indoor greenhouse and hydroponic farms from approximately a dozen suppliers throughout North America, including the West Coast, Pacific Northwest, Southeast and Great Lakes regions of the United States; Eastern and Western Canada; and Mexico. "Nearly all tomatoes will be sourced from the United States and Canada, giving Wendy's customers the benefit of fresh, great-tasting tomatoes from sources that match the brand's North American restaurant footprint", they said.

Quality assurance
"We are excited about the superior flavors we can achieve with this change," said Dennis Hecker, senior vice president of quality assurance for Wendy's. "Additionally, greenhouse farms provide supply predictability and quality assurance benefits—including continuity of supply; protection of crops from harsh weather; safe, indoor growing conditions; and a significant reduction of chemical pesticides used on the plants."

Wendy's also believes that greenhouse growing will support local economies by sustaining the agricultural workforce with fresh produce that can be grown year-round in comfortable, indoor environments. "It will also bring economic opportunities to regions that previously have been unable to support year-round agriculture production due to geography and climate." The benefits include the significant reduction of chemical pesticide use, including replacing pesticides with natural integrated pest management practices such as ladybugs; water and land use benefits; safe, indoor working conditions and economic benefits to regions where the greenhouses are located.

Other products?
Tomatoes aren't the only vegetable being used in the Wendy's burgers and salads. The iceberg lettuce currently is advertised as being hand-chopped. Although not mentioned as a indoor-grown only vegetable for the whole Wendy's chain, various restaurants serve indoor grown lettuce. At least three restaurants on Guam are supplied by Freight Farms customer, Paradise Produce.