Great start to US watermelon season

The domestic watermelon season in the United States has started on a positive note, with plenty of volume out of Florida kicking in. Production is currently concentrated in South and Central Florida, while Texas and North Florida are preparing to start their seasons very shortly. Volumes are expected to be strong for the next two weeks before tightening due to a later start for North Florida.

"The domestic watermelon season started a few weeks ago, with our production located in Immokalee, Arcadia and Lake Wales," shared Mike Martori of Stella Farms. "This week we have seen production really ramping up and we expect high volumes for the next two weeks. Conditions are great with warming temperatures and minimal disruptions. By May 15-20, we could start seeing supplies tighten up just a little as production shifts towards North Florida. This region experienced cooler and wetter weather in the lead-up and will start later than normal, so a slight gap is predicted."

He added that although supplies will become tighter, the situation won't be as bad as initially feared. Additionally, Mexican product will still be coming in strong across the border. "We were worried that supplies will be tight ahead of Memorial Day, but now it doesn't look like we will be as short as we first thought. Over the next week, Texas will also be starting and we should see a continuation of strong volumes arriving into McAllen and Nogales, especially the latter. In fact, Nogales is seeing increasing watermelon volume and will have very good number throughout May." 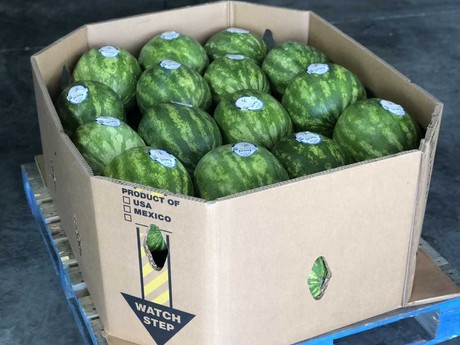 Market positioned well for promotions
Right now, suppliers are seeing prices dip slightly as production increases, but strong demand is ensuring good movement. This bodes well for retailers looking for watermelons ahead of the Memorial Day holiday. According to Martori, the current pricing and volumes will remain steady for the next two weeks.

"The market is seeing some aggressive pricing as production remains strong," he observed. "Out of Nogales, the market is relatively stable but pricing is aggressive there as well. This is good from a retailer's perspective as it's currently a buyer's market and there are plenty of opportunities for some good promotions."

As supply tightens in two weeks, prices are expected to firm up, but not too much. "The Memorial Day holiday sees most retailers promote watermelons and although supplies are expected to be tighter by then, we should still see sufficient volume and prices will be within normal ranges." 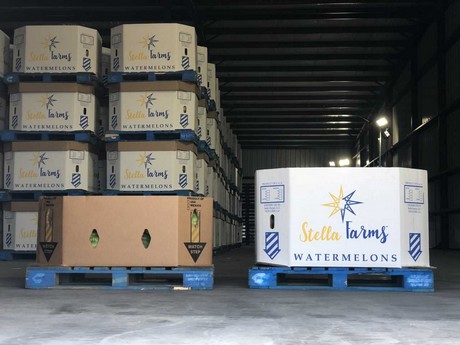 Retailers interested in 'half bins'
Given their large size, watermelon display packaging doesn't vary too much. One exception that has been noted is that retailers tend to put larger displays out during the summer when watermelon demand and movement increase. This provides an opportunity for the melons to be more prominently displayed in store. However, due to an increase in interest, Stella Farms has been supplying retailers with more 'half bins', which are smaller in size.

"During the domestic season, most retailers convert to the 24" bins after typically displaying watermelons in cartons during the quieter winter months," Martori explained. "However, we are seeing an increase in demand for 'half bins' which are 17" in size. Retailers have found them to be useful in smaller stores where the larger 24" bins are less practical. Some stores also prefer to have a higher rotation of fruit on the floor. The half bins allow for this while the retailer can still display watermelons in a prominent and central position in the store.