Monkeys harass anyone who is not wearing pants and destroy crops

In Malava neither women nor crops are safe

Cheeky monkeys are harassing women in Mahira, Malava subcounty. The monkeys only fear men, but they confront women whenever they see them. Women say they are forced to wear trousers to drive the primates from their farms, because they do not respect anyone in a skirt or dress.

Mahira residents have been complaining about the invasion, saying they have been destroying their crops. The also kill and eat chickens.
Residents have threatened to kill the primates they claim were dumped in a nearby bush by the KWS officers five years ago.
More than 100 households have been affected and residents no longer plant maize for fear of losses. 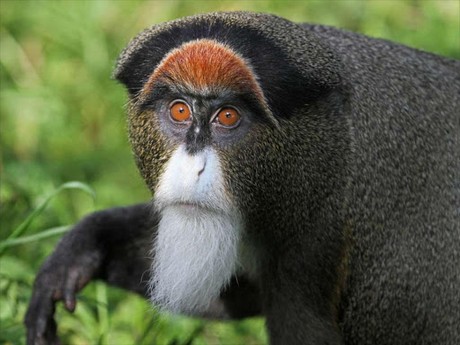 Reuben Demesi, 59, on Monday said there are more than 200 monkeys in the area which have destroyed crops on 80 acres.
“The monkeys move in troops of between 10-20 and raid the village very early in the morning and at night when we are asleep. They destroy maize and beans right from the time they germinate, bananas, nappier grass, vegetables and sweet potatoes,” Demesi said.

He said he incurred losses of more than Sh200,000 after the monkeys destroyed his 10 acres of banana plantation and five acres of maize and beans last season.

Everlyne Simwa, 43, said the monkeys have been harassing women, and they have to call men to help drive them away. “We are forced to call men to assist us chase the primates from our farms when they strike because they can easily assault us. We have now learned to wear trousers to beat them because they respect no one in a skirt or dress,” she said.

Simwa said the situation is made worse when the monkeys are joined by those from the nearby Malava forest, especially during the planting season.

She urged the KWS to compensate residents, or they will go to court to seek redress. “Our farming activities have been affected adversely in the last two seasons. I used to harvest 30 bags of maize from my three acres but this reduced to three bags last year. I'm now repaying a acco loan I took to buy farm inputs despite having made huge losses,” Simwa said.

Poultry farmer Caleb Maina said the monkeys invaded his home and killed 300 chickens in January. “I forgot to lock the door to my birds’ house and the monkeys destroyed 50 trays of eggs that I had collected that week totaling Sh 15, 000 besides killing the birds,” he said.

But Kakamega forest deputy warden in charge Dorosi Kiloti refuted claims that KWS dumped the primates in the area. Kiloti also dismissed claims by farmers that the residents have been making complaints to them but no action has been taken.

“The farmers should not kill the monkeys as it’s against the law. Let them make a formal complaint to us so as to work on better ways of helping them,” he said.