Starbucks has added a refreshing hot pink vegan dragon fruit drink to its permanent menu in U.S. and Canada stores, and it’s taking Instagram by storm.

In a press conference in 2017, Starbucks CEO Kevin Johnson revealed that Starbucks was planning to increase its profits by developing more plant-based options thanks so high demand for these options for customers.

And the brand certainly seems to be sticking to this plan as it has just released its new summer menu in U.S. and Canada stores and has added a pink Dragon Drink to its permanent menu made from a blend of dragon fruit, sweet mango and coconut milk. 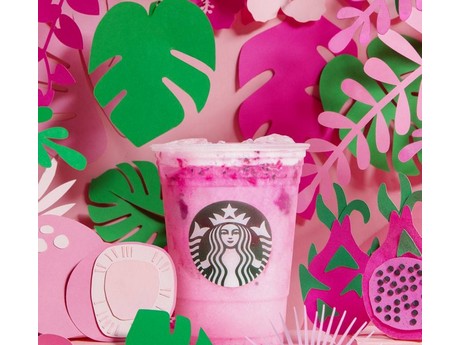 Describing the eye-catching new summer cooler on its blog, Starbucks wrote: “The vibrant Dragon Drink starts with Mango Dragonfruit Refreshers combined with creamy coconut milk. It’s a tropical, crave-able combination of fruity and creamy refreshment.”
According to Starbucks, the new drink “adds a pop of color to your cup (and social media feed).”

Starbucks originally released a variation of the beverage last year, the original Mango Dragonfruit Refresher, which became a firm favourite with customers who requested the coffee shop giant offer the drink with coconut water instead of water to make for a creamier beverage.

Customers who would prefer to order the drink without coconut milk can still able to order the original Mango Dragonfruit Refresher, which is also part of the summer menu.

In 2018, the chain announced it would now be offering a vegan version of its iconic Pumpkin Spiced Latte after changing the recipe of its pumpkin pie flavoured sauce to make it dairy-free, meaning that the popular drink was vegan-friendly for the first time since its launch in 2003.