If anyone happens to pass by the land of Al-Amin, a farmer in Galachipa upazila, he or she cannot help but see coloured watermelons lying on a plot of agricultural land. It is a marvellous sight bound to make people stop.

Last year, Al-Amin planted hybrid watermelons on an experimental basis on one acre of land. It fetched him Tk. 4 lakh. Buoyed by that experience, the farmer has cultivated these hybrid plants on 15 acres this year. The inside the hybrid varieties can be red, yellow and orange. Its taste is sweet. The dazzling colours are attracting buyers from across the country. These watermelons are being sold in different areas including Karwan Bazar and Bogura. 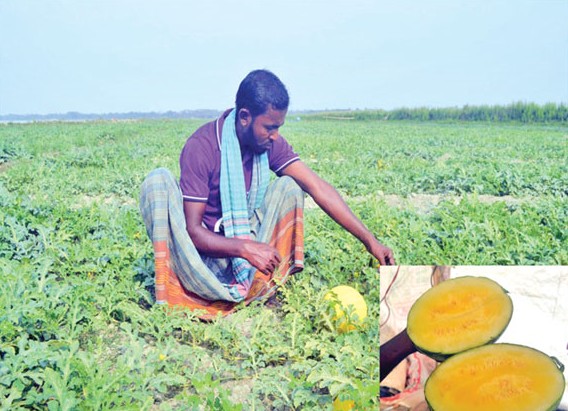 Al-Amin said if the weather stay favourable, the watermelons could fetch him Tk. 50 lakh this year.

Sources in the upazila agriculture office said a record quantity of watermelons has been produced in Galachipa this year. Different high yielding varieties have also started hitting the market. The farmers are looking at handsome profits due to the high price in the market.
Officials in the Galachipa agriculture office say if the weather remains favourable, the production of watermelons can exceed 5,000 metric tonnes. The fruits can fetch about Tk. 800 crore.

Accoring to Galachipa agricultural department sources, at least 35 metric tonnes of watermelon per hectare will be produced in the upazila. Owing to the use of fertilisers and pesticides, the yield will be better than the previous year.

"I have planted four types of watermelons—including yellow, red and orange—on 15 acres of land. It costs only about Tk. 2 lakh to buy seeds. The cost per kilo-acre has increased from Tk. 50,000 to Tk. 80,000. Besides, land, fertilisers, pesticides and labour wages cost Tk. 15 lakh. Hybrid varieties of watermelons cost more than local varieties. But the hybrid varieties provide a good yield and thus fetch higher profits," said Al-Amin.

Upazila agriculture officer ARM Saifullah said watermelons have already become one of the few profitable crops for farmers in the region. More farmers would be benefited if the watermelons could be stored properly, he added.