High fiber bread developed with the use of citrus fruits

Dietary fibers help to keep you healthy and prevent cardiovascular diseases and the onset of type 2 diabetes. For these reasons, the researchers at CREA (Cereal Culture and Industrial Crops and Olive Growing, Fruit Growing and Cultivation Centers) have developed a bread "high in fiber", enriched for the first time with the fibers contained in citrus flour.

The latter is made up of over 70% of fibers, of which 60% are insoluble fibers and 40% are soluble fibers. Citrus flour is obtained after numerous washings and drying, from the "pastazzo" (peel, pulp and seeds), a by-product of citrus processing.  The "pastazzo" still represents a costly waste, causing high disposal costs and environmental problems, given the production of around 500,000 tons per year.

Starting from the bran and the parts of the bran (several amounts of bran and "tritello", which is a fine bran, translator's note) that are more easily digested by the human body, loaves of bread (about 1 kg) are produced in an industrial bakery, with the addition of 2 types of fibers of citrus fruits (red oranges and lemons), alone or mixed, at 2 different levels (1.5 and 2%). Researchers evaluated the effects of the different types and levels of citrus fibers, the different storage times (up to 120 days) and their interaction with the chemical, physical and sensory parameters of the bread after baking and during long storage (thanks to the packaging of the loaves made with special plastic films in a modified atmosphere, also known as "ATM"). 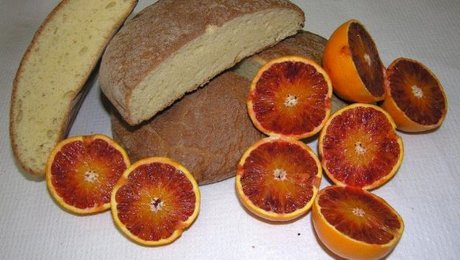 From a chemical and physical point of view, citrus fibers had no impact on the preservability of the bread, on the volume and weight, on the internal structure and on the pH. From a sensorial point of view, the bread loaves enriched with red and lemon orange fibers have a slight citrus flavor, but qualitatively they are similar to  bread loaves that instead are not composed of such fibers. Furthermore, the addition of fibers of red oranges and lemon in durum wheat flour allows the production of bread "with a high fiber content", as its' values are above 6 g per 100 g of product, which is the minimum threshold according to the provisions of the Control Regulation 1924/2006.

On the other hand, traditional wholemeal bread also consists of the outermost layer of the seed (the so-called broad-leaf bran), that part which contains 100% insoluble fiber, which is not easily digested and which may adversely affect the physical and sensorial characteristics of bakery products (volume, height, internal cavity, external appearance, crust roughness, smell, colour and taste). Therefore, unlike bread made with 100% wheat flour, the one enriched with citrus flours preserves the physical and sensory characteristics of traditional bread, but with greater nutritional value.

Finally, the use of citrus fibers in bread-making can be considered an ecological alternative for the re-use and enhancement of waste and by-products of citrus processing.

The study, carried out together with the Department of Agriculture, Food and Environment of the University of Catania, was recently published in the prestigious magazine Frontiers in Nutrition, and is available at the following link: ttps://www.ncbi.nlm.nih.gov/pmc/articles/PMC6381019/