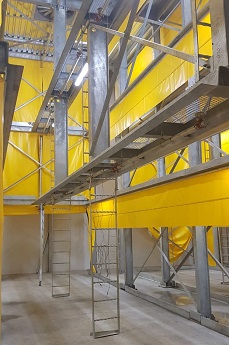 They will receive their first consignments of soft citrus destined for the United States in this week.The first conventional ship for the USA is expected in the next week.

The 12,000m2 facility currently has a capacity of 5,000 pallets (apart from Cape Fruit Coolers’ other facility in Killarney, with additional capacity of 6,500 pallets). The company has also recently been approved to handle the citrus consignments for Japan, also a cold steri market, currently cooled at the Killarney facility.

The new facility awaiting the first consignments of citrus for the USA (photos: Steve Oosthuizen)

“Growth projections for citrus, particularly from Citrusdal, are pretty drastic over the next five years, so we’ve made allowance for that by designing this facility to be doubled in capacity,” says Steve Oosthuizen, managing director of Cape Fruit Coolers. “Eventually we’ll have a capacity of just over 12,000 pallets at our new Richmond Park facility. The entire facility is cooled, and all movements take place under cooled conditions, to the advantage of the shelf life of fruit.”

He notes that the facility would be able to provide a plan B to citrus growers in the north should a crisis of congestion arise at Durban Harbour.

And should the EU market also become a cold steri market, this facility will allow the South African citrus industry to seamlessly make the transition.

Last year the decision by FPT in Cape Town harbour that it would no longer provide the cooling facilities for US conventional exports – an announcement that was long expected – forced Cape Fruit Coolers to expedite its plans for a new cooling facility. Steve notes with pride that a 14-month project was brought to completion in just 10 months, right on time for the start of the US export season, and completely designed and executed by South African engineers.

Two years ago, Cape Fruit Coolers had bought undeveloped land in a prime location, right next to the N7 highway which leads up the coast to Citrusdal, for exactly this purpose. The company’s shareholders years ago already identified the strategic importance of investing in the expansion of state-of-the-art cooling facilities. Cape Fruit Coolers shareholders are Dutoit Invest in Ceres, Goede Hoop Verkoeling in Ceres, Ceres Koelkamers and APM Terminals (part of the Maersk Group).

The facility currently has a 5,000 pallet capacity, but is planned to double in capacity

Entrance to the new facility