Potato prices rise 43% over two days due to harvest disruption

Widespread and prolonged rain over the eastern parts of South Africa has disrupted the Free State potato harvest, reducing supplies on the market and driving a consequent strong increase in price: over two days last week the daily average national price on a 10kg bag of potatoes rose by 43%.

On Tuesday a 10kg bag cost an average of R37.15 (2.3 euros) at South Africa’s major municipal markets, a figure that had increased to R53,29 (3.3 euros) by the end of last week. At the Durban market the top 10% class 1 medium potatoes was R85 (5.2 euros) per 10kg bag and R79 (4.9 euros) in Johannesburg. In Cape Town, a similar bag was much less expensive at R53 (3.3 euros) because Sandveld potatoes from the Olifants River region supplement Cape supplies. 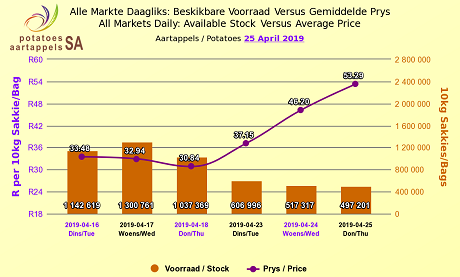 Potatoes SA graph of 25 April 2019 showing that as supplies decrease, the price rises

The widespread rain since the end of March, and particularly over Easter weekend, meant that farmers couldn't go into fields to harvest. Under these conditions, and especially on heavy soil, tractors get bogged down and damage is done to soil structure.

The autumn rain of March had already had an impact on potato quality, but the cool temperatures that have accompanied the rain will have a beneficial effect on potato quality and slow the development of disease and deterioration.

Currently potato stock levels at the markets are low, at one stage below 500,000 10kg bags countrywide, but by the end of the week it had climbed to almost 700,000.

Potato South Africa, the national potato industry body, says that on the Wednesday before Easter weekend more than 600,000 bags were received on all markets. A week later, after Easter weekend, fewer than 200,000 bags were received. “As soon as the rain stops and the soil has dried out, farmers will recommence their harvest. Despite a smaller projected harvest from the eastern Free State producers won’t necessarily harvest at a slower pace, because that could have a negative impact on quality.” 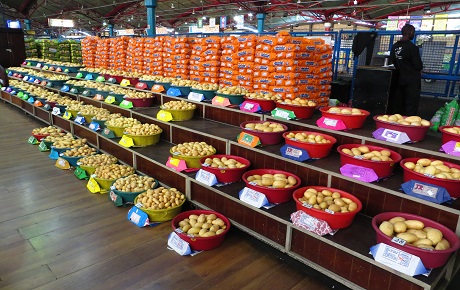 In the eastern Free State potato producers are able to store unharvested potatoes underground, but only if soil moisture is low. In the southwestern Free State the potato harvest was already mostly finished when the heavy rains started.

The organisation notes that the current rain will greatly improve the overall soil moisture levels and therefore the prospects for the new planting season after winter are good.