Agricultural producers gave away 20 tons of fruit and vegetables on Tuesday in front of the Casa Rosada, in a protest demanding the sector be granted relief measures amid a fall in consumption and the rise in production costs. Hundreds of people formed queues for hours to receive free pears, apples and oranges. 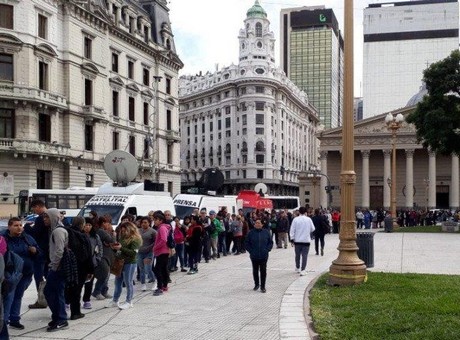 Argentina is currently gripped by economic crisis, with inflation totalling 11.8 percent in the first quarter of the year alone. Prices have increased 54.7 percent over the last twelve months. GDP contracted by 2.5 percent last year.

"The situation is critical," said Sebastián Hernández, the president of the Federation of Fruit and Vegetable Producers of Rio Negro and Neuquén, the region that produces the overwhelming majority of apples and pears.

"Vegetables from time to time you eat but with fruits, in my economic situation, it becomes very difficult to be able to consume them. It is very expensive," said María, 50, as she waited with bags to pick up produce in the famous Plaza de Mayo square.

The government last week launched a raft of measures aiming to curb inflation. Around 60 essential products have had their prices frozen, along with tariffs for public services for the next six months. Consumption collapsed 8.7 percent in March compared to the same month last year, the largest monthly fall since 2002.

Ariel Panozzo, the president of the Citrus Federation of Entre Ríos Province, said that profitability for producers has been shattered: "In 2017, the cost in tolls to send a round trip truck to Buenos Aires was 1,700 pesos and today it is 6,000 pesos (respect. €35.76 and €126.19)."