Demand for value-added hot peppers from Mexico heating up

Supplies of hot peppers from Mexico are good right now though there is more pressure on demand.

“Supplies are good and about the same as last year. We’ve had good quality. But the demand is higher because of weather in other parts of the country where they’re not getting started as early as they normally would,” says Samuel De Los Santos of Don Hugo Produce, Inc. in Edinburg, Tex. “It’s helping us out a little bit.”

While Don Hugo works with a variety of peppers including Jalapenos, Serranos, tomatillos and more, it sees growth in a few areas of the business including value-added items of bagged peppers for foodservice or retail. “We’ve also been asked a lot from foodservice about stemless Jalapenos and Serranos and tomatillos without the husks. They want them ready to process,” says De Los Santos. “There’s been interest in this for awhile now but the volume is picking up. More and more people are interested in that.” 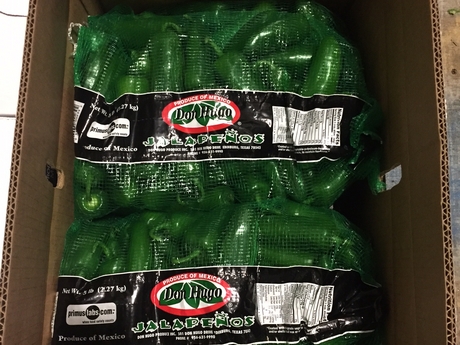 Price check
While availability on peppers is fairly even across the board, De Los Santos notes that Jalapenos are holding the higher price. “They’re in the $19-$20 range and the other items are about $10-$12,” he says. “That’s the normal market for Poblanos, Serranos and some of these other items.” He also adds that with the increased demand, prices have also seen some more fluctuation. “But it’s just a bit of up and down movement. Nothing drastic,” he adds.

Viva Fresh
Those value-added items are one item that Don Hugo will be promoting at this year’s Viva Fresh show in San Antonio, Tex. from April 25-27. “We’d like to expand our customer base in the value-added items,” says De Los Santos. “So we’ll show our master cartons with the bags in them and try to get some input as to what the customers are looking for. We’d like to listen to them more and fill whatever needs they may have.”