Where to for packaging in a war-on-waste world?

After the ABC’s War on Waste placed the use of packaging in the fresh produce sections of Australia’s supermarkets under close scrutiny, growers and retailers are under pressure from customers to reduce plastic packaging. But any reduction must be balanced against the benefits that packaging provides.

War on waste
The world’s annual consumption of plastic materials has increased from approximately five million tonnes per annum (MTPA) in the 1950s to over 400 MTPA today. With 37 per cent of plastics being used for food packaging, any efforts to reduce land or marine plastic pollution must include a significant shift in the way food – including fresh produce – is packaged.

At present, a visit to the average Coles or Woolworths ambient fresh produce section will reveal the majority of apples and pears are sold loose, although market analysis by Nielsen in 2018 showed a growth in popularity of pre-packaged kids’ packs. Sales of pre-packaged kids’ apples in Woolworths increased by 20 per cent during the year, albeit off a low base.

Woolworths told Yahoo7 News that the supermarket is committed to removing unnecessary packaging in produce and will be trialling the removal of plastic packaging on a further 80 lines over 2019, having saved 140 tonnes of plastic in the fruit and vegetable range in the 12 months to June 2018. Across the Tasman, New Zealand supermarket chain Foodstuffs have seen sales of some vegetables soar by 300 per cent after ditching plastic packaging in a campaign called “Food in the Nude”. 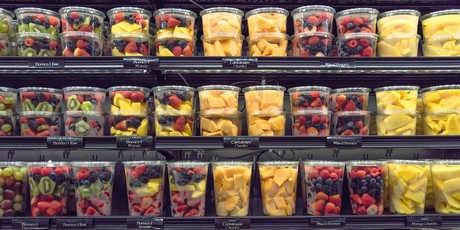 Cut fruit
Marketed as a convenient, ready-to-eat snack, pre-cut and packaged fruit enables retailers to set a higher price point. Research from Cornell University’s Food and Brand lab in the US revealed that consumption of apples in school cafeterias was 70 per cent higher when apples were served pre-cut.

But many consumers and environmentalists are unhappy with pre-cut and packaged food. British polymer scientist Anthony Ray wrote in The Conversation:
“Packaged fruit and vegetables are egregious examples of excess plastic because they already come in a protective skin. Bananas already come in a perfectly designed wrapper … Prepacked orange segments, meanwhile, last about four days whereas a whole orange can last months. Compare the environmental lifetime of orange peel (months) and polyethylene (effectively eternity) – all for the convenience of not peeling an orange.”

This trend is facing significant public backlash, as illustrated by the public furore over UK chain Marks & Spencer’s “Cauliflower Steak” – two slices of cauliflower with herb dressing wrapped in single-use plastic and sold for double the price of a normal cauliflower. Another factor to keep in mind is pre-cut food comes at a nutritional cost: cutting fruits or vegetables exposes them to oxygen and light, and sometimes heat, all of which affect vitamin retention.