In the world of asparagus farming, modern, high yielding and high quality varieties are more and more in demand. As a result, Südwestdeutsche Saatzucht GmbH & Co. KG is increasingly concentrating on its two successful varieties, Ramires and Raffaelo, says Felix Grebhardt.

The Raffaelo and Ramires varieties.

The Ramires is an early, thick variety with good top qualities, that has been grown commercially for over 10 years. The first stems were already harvested four weeks ago. "So far, we have had good experiences with this variety in our area and we've seen it establishing itself as the standard variety in the market for the last few years. I therefore assume that the Ramires will prevail in the coming years, becoming one of the main varieties in the early-yield area. There is a lot of change going on now, replacing the well-tried early varieties with some new varieties, including the Ramires." 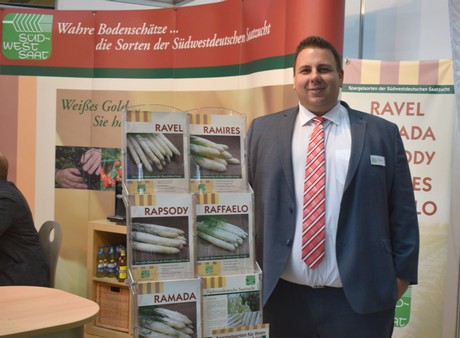 Felix Grebhardt at his booth at last year's ExpoSE in Karlsruhe.

The seeds of the asparagus varieties are produced in-house and the young plants are then bred by propagators in Germany, the Netherlands or France. In the end, the varieties are cultivated mainly in Central and Western Europe - from South Tyrol through to the German-speaking countries and Benelux to Scandinavia.

Future of the white asparagus
Although as a breeder he is not directly related to the trade, Grebhardt sees good sales opportunities for the white asparagus. "A lot has already happened in the field of peeled asparagus and convenience products. It is difficult for me to judge whether these products will continue to establish themselves. In any case, one must be prepared for the fact that the demand for white asparagus will no longer be expanding in the long run." 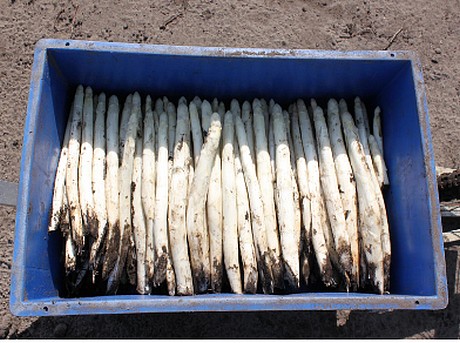 Fresh asparagus of the variety Ramires, coming from Lower Saxony

Varieties for the whole season
In addition to the Ramires, the Raffaelo is the second hobbyhorse of Südwestdeutsche Saatzucht GmbH & Co. KG. This late variety was able to establish itself in the market very quickly, according to Grebhardt. "I am pretty sure that the Raffaelo will become the most important late variety in our climate sector in the next two to three years."

Left: Mr Grebhardt in the asparagus field. Right: The Ramires variety is cultivated as green asparagus in some places.

In principle, both types are suitable for all sectors - from direct marketing to wholesale and retail. "Clearly, there are differences between the individual markets. On the wholesale market, it is particularly important to be able to deliver large quantities early, but equally good earnings are important for the working economy. Basically, with the Ramires and the Raffaelo, we have a very good early and a very good late asparagus for the production of pale asparagus in the temperate climate. This means we can cover the whole season with our varieties."