Below average drawdown
The end of March estimate suggests that an additional 0.86Mt of crop was released from grower ownership since our last estimate. This comes in at 13% below the five season average (2013-2018) and is the lowest drawdown since 2012/13. 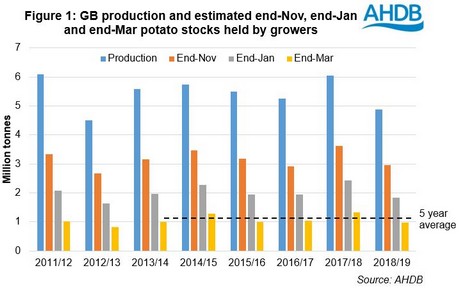 Packing supplies bolster total stocks
While the overall stock levels stands 13% below both the five and three season averages, individual market sectors continue to show significant differences in drawdown rates. The unique start to the season is a key factor driving this.

The total stock figure is bolstered by a relatively large quantity of packing supplies ( c.412Kt), which while 17% below stocks at the same period in 2017/18, remains slightly higher than average (2015-18). At this point of the total crop left in grower ownership, 42% is intended for the packing market. This is 6 percentage points higher than average (2015-18) for this point in the season. 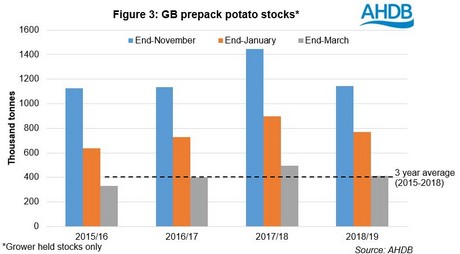 For processing stocks, drawdown has returned closer to normal following increased movement earlier in the year as growers moved at risk stocks. Processing stocks stood at c.316Kt, 12Kt below stocks in 2016/17 another year of tight supply. This comes in at 17% below average (2015-2018) and a 25% reduction on the year. 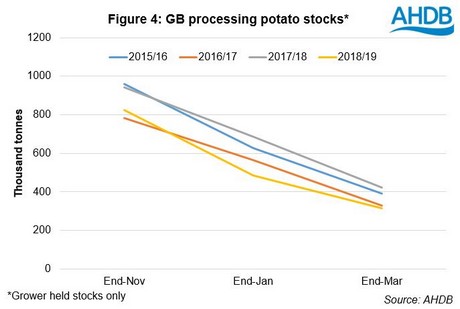 Scotland continued to account for a large proportion of total stocks at end-March, with 34% (c.334Kt) located within the country. An availability of competitively priced good quality packing material from Scotland has weighed on prices in recent months with material moving well into England. With a significant proportion of stocks still located within Scotland this seems to be a trend that is likely to continue as the season moves forward.

Conclusion
Despite stocks remaining below average the careful management and relaxing of specifications this season has limited some of the impact from this season’s low production. With the likelihood of significant carryover to be limited to the packing sector, the availability of the early crop will be the key watch point as we approach the new season. At this point, planting is progressing at pace and conditions appear good across the majority of GB. However, water availability remains a concern for some regions moving forward.