"International cuisine and increasingly vegetarian diets work out fine for us"

It is a cool 13o in the cave. Water drips from the ceiling, a sweet smell is in the air. From countless blocks stacked on shelves, mushrooms stretch their brownish hats towards the ceiling of the cave. Here, in Rotzloch in Stansstad, Swiss brothers Alex and Urs Lussi have been breeding king trumpet and pearl oyster mushrooms for three years. In contrast to the common button mushroom, these mushrooms are still a niche product in Switzerland. "The market is growing, however," says Alex Lussi in his latest blog for Champignons Suisses. "The international cuisine and increasingly vegetarian diets work out fine for us." 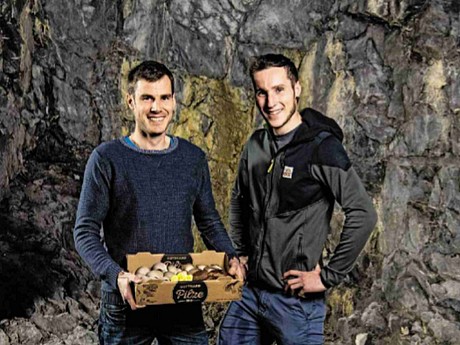 The climate in the former cheese storage, deep in the mountain, is perfect for mushroom cultivation, regulating itself year-round all by itself. "Only fresh air must be supplied, since mushrooms need a lot of oxygen for optimal growth," says CEO Alex Lussi. The approximately 80 meters long and 30 meters high Rotzloch is one of the three locations where the two Nidwaldners produce organic shiitake, king trumpet and pearl oyster mushrooms under the name Gotthard Organic Mushrooms AG. It is no coincidence that the mushrooms are grown in different locations. "The strongest species among them, the shiitake, would displace the others over time if we could grow them in the same place," says Alex Lussi. 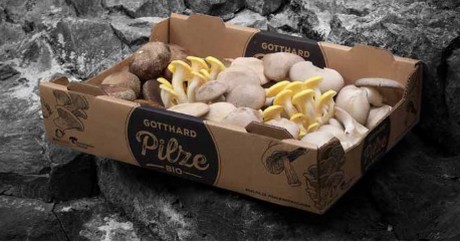 Sophisticated breeding process
Mushroom cultivation is very demanding and takes place in several steps. "Fungus spores are similar to pollen," explains Alex Lussi. The spores are settled on rye grains as carrier material. These also serve as a food source for the mushrooms. Thereafter, the rye grains are mixed with the fungal spores into a so-called substrate. This can be of a different composition, depending on the mushroom variety. 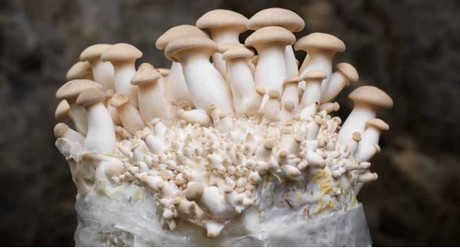 For the king trumpet mushrooms, the brothers use sawdust of oak and beech. In order to achieve optimum conditions for the growth of the fungi, the substrate is sterilized before mixing. The mixture of substrate and rye grains is finally pressed into 2.5 kg blocks and wrapped in plastic. "All of our raw materials are from Bio-Suisse certified agriculture," says Alex Lussi. This distinguishes organic mushroom cultivation from conventional cultivation. The fungus itself is not treated anyway. "Mushrooms are very sensitive; they would suffer heavily if they were treated with pesticides," says Alex Lussi.