The South African and Zimbabwean citrus season is about to start. “Most growers wanted to start this week or last weekend, but the harvest has been delayed somewhat because of rain. However, if the weather stays dry, harvest and packing will start this week, and the first boat loaded with a fair volume will depart next week,” says commercial manager Tjeerd Hoekstra of Total Produce in Rotterdam, the Netherlands. 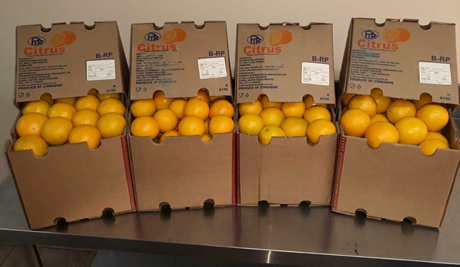 Harvest in line with 2017
“South Africa expects a good harvest for both Valencia oranges and grapefruit. Compared to last year, the harvest will be lower, but last year’s harvest was exceptionally large. This year, the harvest is expected to be in line with 2017, or maybe even a bit higher,” Tjeerd explains. “Last year was strange, with a lot of kilos and small sizes, particularly in grapefruit. This year, people expect volume will mostly consist of sizes 40-45.”

“An exception to the good harvest are the Navels in the Sunday River Valley in the Eastern Cape. This production can’t be made profitable, and the area is decreasing. The volume of category 2 of these trees is considerably high. That’s why a lot of these Navel trees are being grubbed up and replaced with different varieties,” the importer continues. “In South Africa, a lot of lemon and Valencia varieties are still being planted. The boom in the planting of Nadorcott tangerines is now passed its peak.”

Empty grapefruit market
Regarding sales, Tjeerd predicts a fair start to the season. “Grapefruit will be arriving on a relatively empty market in any case. The Turkish season is now ending, and the volume on the market mostly consists of very large fruit. The Moroccan supply is also limited, so the first grapefruit will be arriving on a good market. I do hope we’ll start with realistic price levels, and not like last year, when we started with levels that were too high, it would lock up the entire market. If we start with more realistic prices, we’ll have a better circulation, and stocks won’t become too high.”

“It’s too early to make predictions about the orange sales. However, you can see that Egypt’s position on the market is getting larger and larger. That could be worrying for South Africa considering the expected expansion, particularly if they manage to extend shelf life. The Egyptian oranges are currently being sold on the market at incredibly low prices,” Tjeerd says. “The false codling moth (FCM) and citrus black spot (CBS) will remain a point of attention, particularly after the rain in the north of recent weeks. Fortunately, South Africa did very well regarding CBS, with just a few interceptions.”

Fixed prices elsewhere
Besides, the European market is no longer the first priority of South African exporters. “Everyone is working hard on gaining access to other markets, where prices are supposedly fixed. Because of this, the volume for Europe decreased in recent years. Unfortunately, at the same time it can be noticed that they need Europe to lose volume of the final Valencia, for example, when other markets are full. Export volumes then increase, but that doesn’t necessarily mean quality increases as well. All in all, it could be said that doing business with South Africa is changing for importers,” Tjeerd concludes.