Morocco: Early production is the key to competitive berry exports

Using the mild Moroccan climate to capitalise on prices early in the season is vital for the country's growth, according to a major berry cooperative.

BestBerry General Manager Nabil Belmkaddem told visitors to last week’s Global Berry Congress that earliness is the key, because that is where the best prices are in their main destination of Europe. He added that the industry is looking at introducing more plants and varieties to extend the window even earlier than the current start in September. 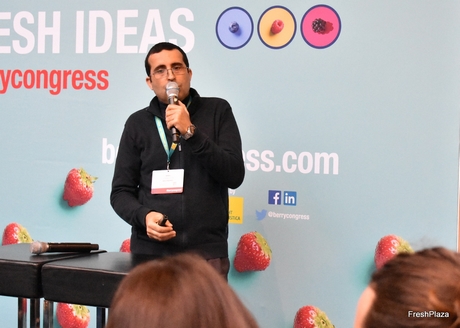 "Before we had only a few varieties, and you couldn't imagine the wide choice of variety now," he said. "Every year we have new varieties coming. Growers may keep the old ones, but there is now a wide choice when it comes to strawberries. The price returned to the grower is coming down each year, so they need to become more competitive. It's becoming more and more difficult because it takes a lot of work to create the perfect berry, without the blemishes, with the right colour, the right firmness and so on."

"It's because we have no frost, in North or South Morocco," he said. "We have (other) weather challenges, but still we can produce a good product in the winter months. We can produce fruit from mid-September to mid-June - so 10 months of the year there are berries being exported from Morocco to Europe. We can do part of it in winter, which is the important part, we can also do it in the fall or spring - but we are less competitive during those periods."

He says strawberries are the main variety of berry, but the production figures of blueberries and raspberries have and tripled over the past three years.

"When we have warmer weather in spring it is very difficult for strawberries to travel during that time," Mr Belmkaddem said. "There are two main areas for berry production in Morocco - the north and south. We see the north growing a lot of strawberries, some raspberries and blueberries. But in the south is where the winter production of berries is happening, due to extremely favourable winter climatic conditions. We now get yield and we can get mild temperatures but no humidity and rain, so there is less disease pressure compared to the north. There are also blueberries down south because of the earliness."

Morocco exports to 41 countries, but the majority to Europe; 98 per cent of strawberries, 99 per cent of raspberries, and 89 per cent of blueberries. But he admits that the business model is a little more complex, and it is important for the buyers in Europe to realise it is based around grower investment, and selecting the right variety.

"It is all based on grower profitability," Mr Belmkaddem said. "It all falls down if grower profitability is not there. So, we need grower investment and it is capital intensive. We have a variety that works - as not all varieties work - and now to be competitive the growers are telling us to give them a variety that works. Maybe a few years ago you could work around a variety. It has been a steady increase in terms of exportation, but it is mainly due to more blueberries and raspberries. But for strawberries it has been stable."

He added that raspberries had a difficult season this year, with prices peaking early, and then dropping to record low levels, which might have been caused by a period of low consumption. But before this year, Mr Belmkaddem says prices were generally on an upward trend.

"Prices were high and it was pretty straight forward," Mr Belmkaddem said. "Growers were planting in the spring to get two cycles; or they would plant in the summer for one cycle. At the end of the cycle the price was OK, and they would pull the plants and grow new ones. Now what we are seeing is growers are also planting in the fall, so we can hit the March and April window. A couple of years ago there were maybe 3-4 varieties available, now it is a much wider choice. The trend we are seeing in raspberries is going from 1-2 cycles to try to do more."

Another trend that is being noticed is that growers are planting more, but returns are less - and Mr Belmkaddem says this needs to be addressed quickly. It is a similar story for blueberries.

"Growers are seeking early varieties," he said. "From now on fruit coming different areas to Europe, prices go down, so growers are looking for varieties that are early. We cannot have a late variety that at the end of the season you need to prune, and there is still fruit on the plant. Again, we are exporting a lot of blueberries. There are more choice in terms varieties of blueberry for the growers than 3-4 years ago."

The growers have contracts with export companies in Morocco, and there are subsidiaries of multi-national corporations, which Mr Belmkaddem says is increasing year by year. He also notes the increase in situations where European companies who are not willing to open their own packhouse, but have a partnership with a Moroccan company who has the funds and logistics.

Blackberries make up only a small amount of berry production in the country, with an area of only around 100 hectares.