“When you throw together all of the factors we’ve experienced this year -  early bunch necrosis, cold, rainy weather during flowering and harvesting and saturated markets to some extent at lower price points - you get a season like the past 2018/2019 season," says Johann Boonzaaier, head of operations at ACG Fruit.

"It’s been tough, although we at ACG Fruit managed to increase production by 38% to reach 2.1 million cartons exported, with a lot of young promising cultivars coming into full production. It's been one of our less prosperous seasons, given lower product prices."

"Slap-bang" into a wall of Peruvian grapes

South African traders recount how they ran “slap-bang” into a wall of Peruvian grapes. Everyone was of course expecting to feel the ripples from the US-China trade spat, but the volume of grapes from Peru took everyone, European buyers too, by surprise.

“There was a period, from around weeks 48 to 50, when it seemed like everyone from Brazil to India was on the European market at once,” remembers a grape grower-exporter from the early northern regions.

Hundreds of additional containers of grapes arrived weekly in Europe.

Peru and Chile are also influenced by their large neighbour. Brazil has lower import demand because of rising grape production for domestic consumption, and therefore later in the season Chile, too, sent more grapes to Europe.

Weighing up costs of bulk versus punnet shipments
Repackaging makes sense in years with a buoyant grape market but this year, coupled with depressed grape prices – two to three euros lower in general - it cost companies in the USA and Peru, but also in South Africa, a lot, says a grower-exporter, cutting into the bottom line.

Not all agree. “Over years we have been in the position to trial different packaging formats and we are of the opinion that the choice of packaging and cost effectiveness will differ from one market segment to the next,” explains a grape trader for an international exporter. “This decision should be based on labour, the import cost of packaging material and product quality. Bulk packaging lends the opportunity to manage the risk in terms of ensuring that customer-specific requirements are met before distribution, where punneted product with issues might have a higher cost implication.”

Difficult year shows up varietal weaknesses but also strengths
Rain when it rather shouldn’t have rained, played a role in the Western Cape, and then there were the inevitable after-effects of years of drought, felt to variable degrees of keenness across the Western Cape. 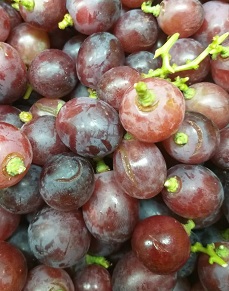 In the Hex River Valley and the Berg River Valley, South Africa’s last regions that are into their final weeks of harvesting, frequent small showers or even some quite substantial rain have made harvesting very onerous.

There are reports of vineyards that had to be abandoned, just prior to harvesting, because of their level of berry-shattering (photo: burst berries removed in the packhouse).

Bursting and berry-shattering in some varieties show up immediately in the vineyard, but others only show up burst on the other side and QC reports are anxiously awaited. 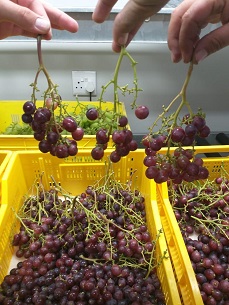 Retail has been a driving force behind varietal development, perhaps, some are wondering, an unintended incentive to fast-track promising new varieties to all of the country's climatically diverse growing regions (which can even differ within a farm), varieties which then didn’t perform as well as initially anticipated (photo: what's left of bunches after removal of burst berries, wasting much productivity in the packhouse).

This is made easier by the speed with which vineyards can be grafted and prepared for planting by nurseries, which takes three years to reach full bearing capacity when compared to tree fruit. The past few seasons were associated with relative high product prices served as proxy for investments in new plantings and establishments, notes an agricultural economist.

Some predict that the industry will start ridding itself of doubtful varieties, not trialled and tested to the full extent of South African climatic conditions, putting its growth prospects back three or four years.

“Varieties will have to be put under the magnifying glass,” agrees an industry insider, who asked to remain unnamed. “Some varieties just are more optimal in certain areas and you have to look at whether your yield is at a sustainable level. You’re looking for constant returns and for that you need yields of 3,500 to 4,000 cartons per hectare, at the least.”

Varieties that showed their mettle
"One of our technical guys invited me to look at vineyards prior to harvesting and packaging and ironically enough, Scarlotta and the last remaining Adora didn’t shatter as anticipated, despite the high periodic rainfall and significant cooler weather which provided some relief and ended the season on a higher note. Adora turned out to be a real pleasant surprise,” says Johann. "Promising cultivars like Cotton Candy, Sable, Scarlotta, Crimson and even Red Globe can be singled out, which performed well and showed their mettle on our Northern Cape and Berg River farms." 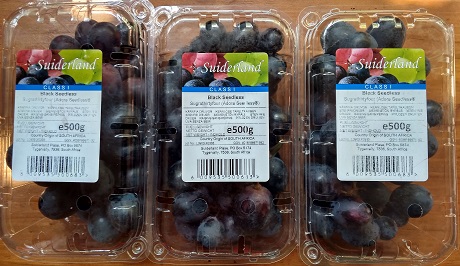 Crimson was reliable, as always, although there are some reports of shattering because of the rain in the Hex River Valley.

Silver lining to tough season
“A season like this has a silver lining in that it shows us that we have to think of other strategies to access new markets and to obtain shelf space,” says a Western Cape grape trader, who includes certain cold treatment regulations in the protocols to lucrative markets as part of the hindrance.