A hail storm ripped through an avocado orchard in the Northern Rivers of New South Wales last week. It destroyed an estimated 4 million avocados in less than 10 minutes. 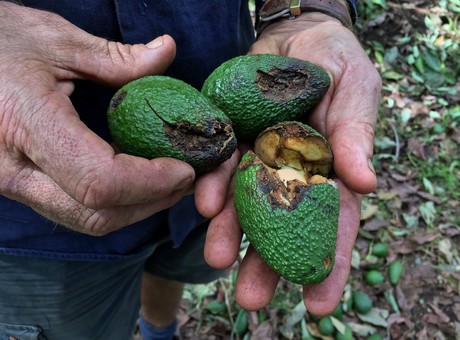 Aussie Orchards' managing director Colin Foyster said 80 per cent of the fruit on the 12,000 trees at the Pretty Gully farm was knocked off and onto the ground. "I wasn't here but some people have said the hail stones were up to three inches [7.6cm] in size and very jagged. It only hailed for less than 10 minutes, but [the stones were] big enough to knock the fruit off the tree or damage the remaining fruit. It's three months away from harvest, so it's all immature, so it's unsalvageable."

Foyster said the remaining fruit on the trees also had impact marks where the hail hit the fruit, and the trees themselves were also damaged. "If it's around the stem, or it's severe, it will lead to a rot and that fruit will then drop off. But most of the remaining fruit, the 20 per cent, it'll just be downgraded."

It is estimated around 200,000 trays of avocados, approximately 4 million pieces of fruit, were destroyed by the hail storm.