[Unless you’re from New Zealand]

The little green fruit that's native to Brazil, feijoa, is one of the most vitamin C-rich foods you can eat. But New Zealand discovered them before us. If you haven’t seen a feijoa before, imagine a fruit resembling a lime that – once cut open – looks like a cucumber inside. Feijoas have a sweet flavour reminiscent of guava crossed with pineapple and quince. To eat a feijoa, just cut it in half horizontally and scoop out the jelly flesh as you would a kiwifruit. 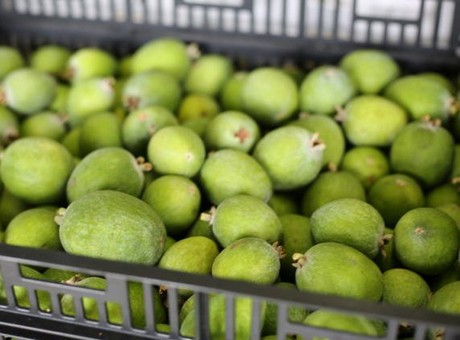 Even though feijoas – the fruit of the feijoa plant (feijoa sellowiana) – are native to Brazil, New Zealanders have made them their own. They are also a massive export industry for New Zealand. The country’s Ministry of Primary Industries recorded 54,003 kilograms of feijoa exports in 2016, compared to 20,637 exported in 2010. So if you’re not buying your feijoas fresh from one of the few farms in Australia, like Hinterland Feijoas, you may be buying a New Zealand-owned product.

Feijoas are also grown and eaten in many other South American countries, Russia, Iran, Spain and Italy. Beyond their flavoursome reputation, feijoas are renowned worldwide because they pack such a powerful health punch.

“It’s a super high fibre fruit that’s rich in vitamin C,” says co-owner of Hinterland Feijoas and feijoa fanatic, Sally Hookey. “Feijoas also contain folic acid, so they are fantastic for pregnant women. On top of that, they've got potassium, magnesium and other vitamins and minerals.