The biannual citrus summit that took place last week in Port Elizabeth brought together a comprehensive group of people involved in the South African citrus industry.

The image that ran through the summit was that of the strength of the collective. Wandile Sihlobo, agricultural economics wunderkind (as Citrus Growers’ Association CEO Justin Chadwick calls him) 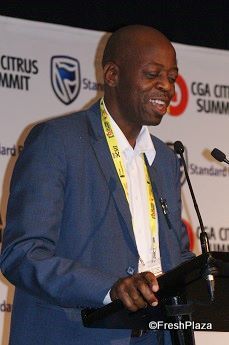 described a current despondency in agriculture, a response to policy uncertainty and, as he put it, “incoherent discussions” around the future iteration of land reform, noting that citrus in fact offered some of the best returns on capital investment in the South African economy.

Dr Mono Mashaba, former South African agricultural attaché to Beijing (left), also talked of a lack of alignment between the work done by the CGA, such as the CGA Citrus Growers’ Company of which he is the executive director, and that of government in this field. The CGACGC is entirely funded by a twenty percent of growers’ levies for transformation purposes.

Land beneficiaries sometimes receive farms in degraded condition
“Business doesn’t have confidence to give us money because we don’t have title deeds,” said Louisa Maloka-Magotsi, citrus farmer in Northwest Province. “The land is not ours.”

She told delegates how, after land has been transferred to an identified land reform beneficiary, such as she was, the government has no further involvement in the farming enterprise. Also, she pointed out, as happened in her case, farming assets like citrus orchards are sometimes left without care or management for what could be a protracted period, before handover of a farm to a land reform beneficiary. “When I eventually get there, the irrigation system is close to zero, trees are stressed, everything is just deurmekaar.”

She appealed to government to keep a hand on things until the farm is handed over, which should take place in the presence of a government official.

She told delegates how she went without medical aid or car insurance to make her new career as citrus farmer work. An appreciative audience clapped when she noted that her trees were 90% healthy today.

“Without the support of the private sector we would’ve gone belly-up”
“It’s been twenty years now that we’ve been knocking on the door of the Department of Land Affairs,” said Siseko Maqoma of Gonzana Farm in the Eastern Cape. “I’m also in the situation where I do not have the title deed to my land. I think a lot of our support has come from the private industry, in terms of marketing agents, in terms of our strategic partners, and without their support I think our farms would’ve gone belly-up a long time ago.”

He continued: “In the Eastern Cape we have an agreement with the Department of Rural Development and Agrarian Reform, which supports black farmers with production inputs and development finance.”

He didn’t mince words and stated that in his opinion land reform has failed because it has proceeded in a corrupt way and some projects “have been given to people who aren’t deserving of the land or committed to agriculture.”

“This debate on land reform is probably one of the most critical in our country at the moment and we have to get it right,” continued the descendant of the nineteenth century amaXhosa King Maqoma. He described how agriculture is unfortunately associated with oppression and the subsistence farming of yore.

“What needs to happen in the rural areas is that we need to change tack and approach agriculture from a commercial perspective, and that’s where organised agriculture needs to play a very significant role.”