The biannual summit of the South African citrus industry is taking place in the coastal city of Port Elizabeth, a gathering of over 600 delegates that brings together all the links of the citrus chain in a holistic way, from farm to market. The inclusive approach of the summit was remarked upon by some of the international delegates.

On the first day presentations ranged from worker welfare and development, to the possible demise of the reefer vessel and the imminent threat of Asian greening disease (HLB) to the South African industry.

Industry has requested withdrawal from IPPC process
The summit started off on a brisk trot as deputy director-general at the Department of Agriculture, Forestry and Fisheries, Mooketsa Ramasodi, announced in his opening address that South Africa was preparing to launch a formal dispute through the World Trade Organisation. 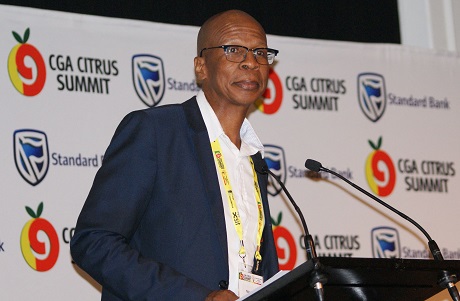 Deputy director-general Mooketsa Ramasodi of the Department of Agriculture, Forestry and Fisheries

“The citrus industry has faced the full force of the hurdles which might be placed in the path of free trade. For about thirty years, South Africa has been engaging the European Union on the EU’s import legislation for citrus black spot. Based on South African research, and general research in the world, South Africa considers this requirement to be unjustifiably strict because fruit is a negligible pathway for the disease to be spread. In 2010, South Africa contested the CBS import measures through the dispute resolution process of the International Plant Protection Convention. Regrettably there has been very little progress, as we have now formally received industry’s request for South Africa to withdraw from the IPPC process.”

“In 2013, South Africa raised a trade concern about the EU import requirements at the WTO Committee on Sanitary and Phytosanitary Measures in Geneva, Switzerland,“ Mr Ramasodi continued. “In 2016, the EU implemented emergency measures on CBS. These were to expire at the end of March 2019. However, according to a media release by the European Commission, on 22 February 2019, these measures are said to be prolonged, which is very regrettable. These are expected to be for another three years. Compliance comes at an estimated annual cost of R1.8 billion [approximately 112 million euros] to the South African citrus producer. It is inconceivable that producers continue to carry the cost for measures which we believe are scientifically unjustifiable.“

“Inconceivable that SA producers continue to carry the cost of CBS”
The matter was discussed at presidential level at the South Africa-EU summit in November last year and again in February this year between Trade and Industry Minister Rob Davies and the European trade commissioner Cecilia Malmström.

“None of South Africa’s technical and political interventions on CBS has produced the desired outcome. As a result, South Africa is currently preparing to launch a formal dispute through the WTO dispute settlement procedure.” 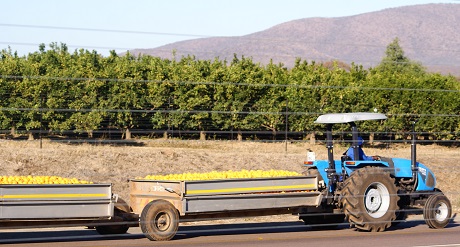 Despite the extremely restrictive phytosanitary conditions under which South Africa’s citrus trade with Europe takes place, he said, South Africa’s trade there amounted to 599,000 tonnes during the 2018 export season. “Often the EU argues that this figure does not support South Africa’s contention that it is hurt by the CBS measures but, clearly, this argument disregards the cost of compliance.”