Drought is over, but the effect will be felt for years to come in certain areas of the province

Satellite-based crop monitoring information service FruitLook has made a visual comparison between two fruit producing areas in the Western Cape to illustrate the stark effect of the three year drought.

Satellite images of biomass production in the Groenland area and the Lower Olifants River region during the 2016/17 season and the 2017/18 season show not only the impact of the drought in the Western Cape, but also the climatic diversity in the province.

Groenland in the Overberg is a top fruit and stone fruit production area, among the least affected by the drought. In fact, last February the Groenland Water Users’ Association was able to donate millions of cubic metres of water to Cape Town. Their favourable water situation is demonstrated by FruitLook’s satellite images of approximately 9,000 ha of orchards over the 2016/17 and 2017/18 seasons. From these images it is evident that biomass production remained very stable over these two seasons. 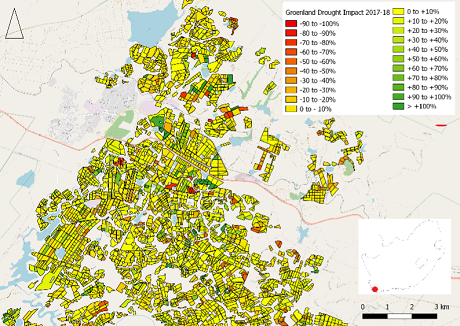 Lingering effects of drought on Lower Olifants River vineyards
Satellite images of close to 15,000 ha of table and wine grape vineyards along a section of the irrigation canal between Klawer and Vredendal in the Lower Olifants River region show a completely different picture, underlining the dire water situation in this area during the drought. “On average, nearly 25% less biomass was produced over the entire Lower Olifants water management area. Worrying is the number of fields which show a close to 100% reduction in growth, indicating the removal of vineyards or their complete die-off,” conclude the authors of the FruitLook report. 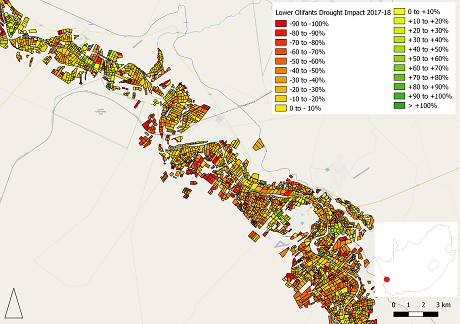 Lower Olifants River: a predominance of yellow, orange and red blocks point to a severe reduction in biomass production (mapp supplied by FruitLook)

“Based on the FruitLook data, it is estimated that close to 200 fields were cleared [in the area under question] over the course of the 2017-18 season. This accounts for close to 5% of all vineyards and orchards in the region.” They continue that a significant part of the fields show a 75% drop or more in biomass production. Simultaneously, almost no fields show a sharp growth increase over these two seasons. This means almost no new plantings were undertaken.

Crucially, there was scant water available for post-harvest fertilization and irrigation in the Lower Olifants River region which, along with the decrease in productive area, the authors conclude, means the 2017-18 drought will be felt for years to come in this region, an analysis that has been borne out by the area’s recently concluded grape harvest.

FruitLook programme covering over 53,000ha
The Western Cape Department of Agriculture estimates the total economic loss due to the drought at R6 billion (380 million euros) and 30,000 agricultural jobs. The provincial department fully subsidises the FruitLook programme, the only of its sort in the world, which employs satellite data sources, weather information and smart models to describe crop growth, water consumption (as calculated from evapotranspiration) and plant nitrogen content. 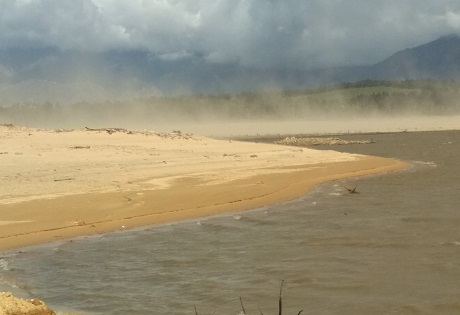 A dust storm over the Theewaterskloof Dam, largest dam in the Western Cape Water Supply System, during the drought (photo: FruitLook)

FruitLook had 776 users during the 2017/18 season, of whom 74% are producers, who use the system to assess and compare water use efficiency across fields and farms. It helps the agricultural sector to determine moisture probe placement and detect water leakages.

Users of FruitLook register their fields on a seasonal basis via the website to make use of the FruitLook service. During the 2017/18 season, 16 507 fields were registered covering more than 53,000 hectares.