Organic turmeric on the rise in popularity

Supplies of organic root flavor vegetables such as garlic, ginger and turmeric are currently steady.

“It looks like the organic ginger will be tight moving forward as the crop is projected to end earlier than in previous years,” says Lawrence Ashmead of Thomas Fresh Inc. in Calgary, Alberta. “We have plans to source our organic ginger from other partner growers in neighboring countries.” Meanwhile organic turmeric and garlic are steady as they were last year at this time. “Last year, our organic ginger supply lasted for longer due to a lengthier growing season,” Ashmead adds.

While ginger and turmeric come from Peru at this time, the garlic is sourced out of California. “All three of our organic toppers are available year-round. However the country of origin changes throughout the year,” says Andrea Dubak, also of Thomas Fresh. She adds that depending on the time of year, ginger can come from Mexico or Peru while turmeric is from Peru year-round and garlic comes from the U.S. and Canada. “We source local or as close to local when possible as we cycle through the seasons,” she notes.

Urban demand
Regionally, demand for the three toppers is particularly high in the Vancouver, British Columbia area. “All three products come in smaller pack sizes such as 3 oz, 4 oz or 5.64 oz which is a fitting package size to display for urban Vancouver stores with limited shelf space,” says Dubak. “However, we also see consistent demand in many Western Canadian cities. These products are shipped as far east as Winnipeg.”

Not only that, but consumers report that the organic garlic is a kitchen staple because of its versatility. That said, organic ginger also continues to climb in popularity with buyers. 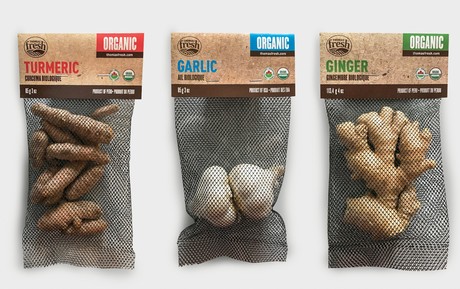 At the same time, interest in turmeric seems to really be on the rise as well. “It’s developed quite a lot of momentum over the last few years and many consumers have become more comfortable using this ingredient at home,” says Dubak. “Health drinks such as golden turmeric milk are now popular in addition to using fresh turmeric root in soups, roasted vegetable dishes, teas and juices. We see consumption increasing for our organic turmeric, especially in the coming years.”

Colorful options
Last year, Thomas Fresh launched a conventional White Turmeric, which resembles ginger root with light brown skin and white flesh (rather than turmeric’s signature orange coloring), in Canada. “Its flavor is similar to ginger but with a unique taste that can be used in curries and teas,” says Dubak. “Depending on how demand grows over the coming seasons, we may transition our White Turmeric into our organic brand.”