There is an upturn in interest in organic produce, from consumers and retailers alike, after a slump of about four years, says Tiisetso Phaweni, marketing manager at Wensleydale Farms, perhaps South Africa’s best-known organic fresh produce brand. “People are searching it out and they’re becoming more understanding of what it is about. That’s why I love visiting international organic trade shows” – Wensleydale Farms exhibited for the first time at Biofach last week – “and talk to other people in the organic sector. It’s so frustrating talking to people about organic and all they can focus on is how expensive it is.” 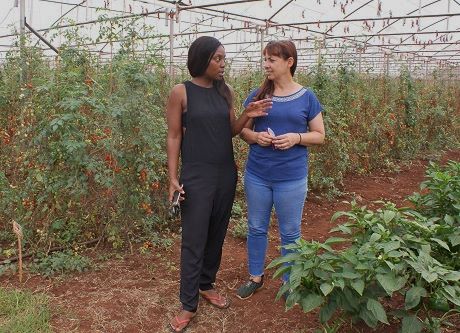 And despite South Africa’s economic downturn, the company is in an expansion phase with the acquisition of two new and much larger farms than the original farm, thirty years old this year, at Knoppieslaagte outside Pretoria. They’re daily delivering organic produce to Pick n Pay and Woolworths, as well as under their own name to health and independent shops, and to the Bryanston Organic Market. Consumers order boxes with seasonal produce online for home delivery. Furthermore, to minimise waste, they have a dehydrated range of vegetables, which they took to Biofach in Germany last week (pictured below). 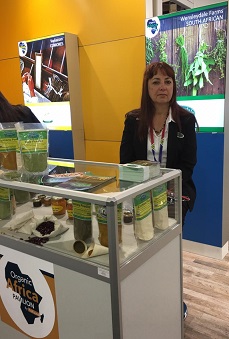 “The CEO, Magapa Phaweni, last year decided to aggressively market the company because a lot of corporate food companies realise that sooner or later they’ll have to move into organic with products like babyfood and food supplements,” Tiisetso says.

“Also, what a lot of people don’t realise, is that these companies have funds for enterprise development, so they have money to develop businesses and as a female-owned BEE [black economic empowerment] company, we fit what they’re looking for.”

On the Knoppieslaagte farm cocktail tomatoes and green peppers are currently grown in tunnels, says Stella Blandin de Chalain, farm manager, while their lettuce under shade netting has taken a hard knock from the excessive heat during December. Butternuts carpet the space between fruit trees and basil grow in the pecan orchard. Soon lettuce will make way for winter crops like kale and broccoli, with herbs bridging the seasonal transition periods.

Every Monday they fly out lettuce to Dubai. “They love our lettuce,” Tiisetso notes. There has been international interest in their organic sweet potato, for processing into flour and the company is keen to explore other export opportunities.

“We have four larger, independent outgrowers, and a number of smaller ones with single products,” she says. “But we need more suppliers, we don’t have enough certified organic producers in South Africa.”

Wensleydale has, amongst others, Ceres, Gobal G.A.P, Food Safety and HACCP certification.

Organic lemon procurement a headache
“We used to have local supply of organic lemons and we sold a huge amount of lemons, but it all changed about 5 years ago.”

Organic citrus producers, primarily in the Cape, have secured export programmes and do not require the local market.

Stella remembers that a few years ago they bought lemon juice from Dubai. “Beautiful juice in little sachets, just to find out that it was grown here in South Africa, put into large tankers, sailed to Dubai, packaged there, and sailed back here. We were still able to sell it, but it had gone right around the world, so the carbon footprint is huge.”

Wensleydale sells organic apples during the early part of the season, grown in Limpopo Province, where their stonefruit also comes from. They’d like to increase their basket of organic fruit.

"I came here five years ago and I was the biggest sceptic,” recounts Tiisetso. “I was like: what? A vegetable is a vegetable! But now I know, you can taste the difference. Before you thought you were eating vegetables but you were only eating cardboard. Now you’re really eating vegetables.”