The winter temperatures are usually too cold for tomatoes in Austria. SPAR PREMIUM Blue Cherry Tomatoes mature in Bad Blumau in winter - in a greenhouse heated by geothermal heat, which is proven to be climate-friendly.

In the Styrian Bad Blumau, even when it is freezing cold outside, the tomatoes ripen, with an aroma and sweetness not inferior to summer produce. This is made possible by hot thermal water, which gently heats the greenhouses of the Frutura Thermal Vegetable World. Thus, the SPAR PREMIUM Blumauer Cherry Tomatoes can grow to their optimum maturity without the use of fossil fuels. The freshly harvested tomatoes are available throughout Austria only at SPAR, EUROSPAR and INTERSPAR. 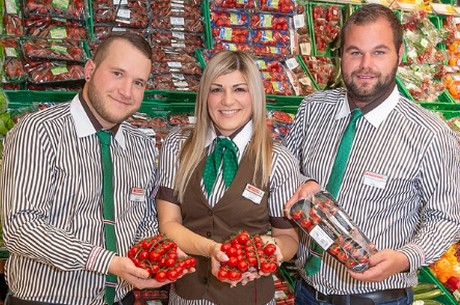 Environmentally sound cultivation due to renewable energy
Tomatoes are the most popular vegetables of the Austrians. According to Statistics Austria, Mr and Mrs Austrian consume 29.2 kg of tomatoes per year. Small, sweet varieties that do not grow in Austria at all or only for a few weeks -due to the climate- are particularly popular. These varieties are therefore grown either in climatically more favorable areas such as southern Italy or Spain or in greenhouses in Austria. By transporting from the cultivation areas or by heating regular greenhouses in Austria with natural gas, high greenhouse gas emissions occur.

In contrast, the red fruit vegetable from Bad Blumau / Styria is truly climate friendly. According to investigations by the Federal Environment Agency, the regional harvest of Frutura thermal vegetable world spares about 28,000 tons of CO2 emissions per year, compared to natural gas-heated greenhouses. And due to fewer fruit-vegetable imports, the Frutura Thermal Vegetable World saves 1 million kilometers driven per year. The exclusive marketing partner in Austria is SPAR.

Austrian cultivation lowers imports
Overly, more than 70 percent of tomatoes and more than 60 percent of peppers are imported into Austria every year, since production in Austria is far too low. The total harvest volume of the Frutura Thermal Vegetable World of around 6,000 tons of fruit vegetables annually, reducing imports from other countries.