Sustainable Banana Plan: a successful model in Guadeloupe and Martinique

It all started in the West Indies in 2007. Analyses of the soil and water revealed the presence of chlordecone, a toxic and extremely persistent organochlorine insecticide, formerly used to fight weevils and banned in France since 1993. The news hit like a bombshell among the local communities, who had no idea that a product authorized for so long could have such repercussions on the environment. As a consequence, the producers themselves expressed a strong desire for change, to reduce the use of phytosanitary products on banana plantations and to evolve towards more sustainable cultivation methods. The Sustainable Banana Plan was launched in 2008, co-financed by the producers of the Bananas of Guadeloupe and Martinique, the Ministry of Agriculture and the local communities.

10 years of existence: 60% pesticide reduction and a massive return of biodiversity
10 years have now passed since the Sustainable Banana Plan was launched. All plantations are concerned and have made changes in their cultivation practices. The results of the Sustainable Banana Plan are essentially measured by the reduction in pesticides, data which is easily measurable, reliable and representative of the efforts made by the producers. Sébastien Zanoletti, Innovation and Sustainable Development Director, comments on the changes observed since the implementation of the Plan.

“The use of pesticides has been reduced by 60%. And while we knew that such a reduction would have an impact on biodiversity, we did not anticipate how much. The return of biodiversity has been amazing. Many vertebrate and invertebrate species instantly reclaimed the environment. This led to some imbalances at first, with invasions by unwanted insects like mealybugs or red spiders, but we held strong and the balance was regained quickly. Studies conducted by local specialists and naturalists two or three years ago showed the wealth of the banana plantations in terms of biodiversity. But no need to be a specialist to notice the massive return of some species. We observed the reappearance of many endemic frog species, with up to 800 frogs per hectare, which is huge. Seven of the twelve bat species present in the West Indies have also been identified in the banana plantations. One of them has even taken residence there. As soon as we stop using toxic insecticides, nematicides and herbicides, biodiversity reappears. Insects reclaim the soil and attract a multitude of predators like frogs, birds and bats who, in the end, protect the crops. Today, we don’t even worry about weevils, as they do not represent a threat for the banana crops anymore. Biodiversity itself regulates the population.” 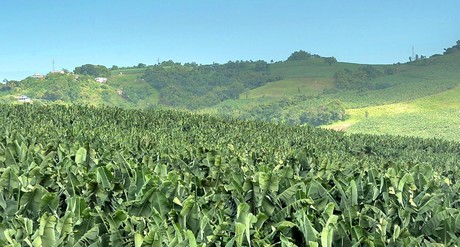 An approach which is part of a desire for continuous improvement
While the reduction of pesticides and nematicides allowed for the return of biodiversity, producers still use fungicides to eradicate the microscopic fungus cercosporiosis. These phytosanitary products are used rather sensibly; 8 or 9 treatments of the soil are carried out in a year, compared to 35 aerial treatments on average in Colombia or Ecuador, under the same humidity levels. In Costa Rica, the cultivation systems can even include up to 70 treatments in a year. However, the success of the Sustainable Banana Plan has inspired beyond borders. Sébastien explains that “the absence of crop rotation creates high parasite pressure on the soil. 30-year-old banana plantations are more prone to issues related to nematodes and weevils. Crops like ours have always been replanted every 7 or 8 years, in rotation with sugar cane or a fallow, in order to break the pests’ cycles.

As for the banana sector of Guadeloupe and Martinique, researchers, engineers, technicians and producers are continually working to reduce the use of phytosanitary products. As Sébastien explains, “the banana industry can absolutely do without chemical phytosanitary products, but the change needs to be properly anticipated. We are talking about steps of 10 years between research and implementation in all of the plantations.”

Beautiful projects ahead
Since the implementation of the Plan, there has been no loss in terms of productivity. “Before 2008, production was on the rise. This slowed it down a bit, but we still obtained the same yields,” explains Sébastien. “The Plan did generate additional costs, around 5 to 10%, which we managed to contain. However, our “sustainable banana” has not found its place on the market. Today, we are beginning to see an offer for bananas “made in France”, which resonate a lot better than the concept of sustainability in the mind of consumers.”

But the banana sector of Guadeloupe and Martinique is not done yet. It is currently developing its own certification for fair trade French bananas exclusively from the harvests of small producers. Zero pesticide residue bananas are also under study, knowing that the reduction of pesticide use under the Sustainable Banana Plan already constitutes an asset to obtain the label. Biological bananas are about to enter the market with a new variety developed over the past 15 years by the CIRAD (Center for International Cooperation in Agricultural Research for Development), selected from wild varieties and resistant to the cercosporiosis fungus. “All that is left to do is to find the right packaging for this banana whose fine skin protects a sweet and slightly tangy flesh.”