A New York state apple variety has just come out of its winter hibernation and will be available for the next few months. The distributors of RubyFrost say the apple reaches its optimal flavor once it has been stored for a couple of months in controlled atmosphere before being shipped to market.

"RubyFrost just hit the market January 1st and we are estimating a sell through late spring, early summer," said Rena Montedoro of Crunch Time Apple Growers. "RubyFrost is the "winterfresh" apple. It is picked at the height of freshness in the fall and stored in controlled atmosphere. The apple develops its flavor in cold storage so it has the delicious taste of a freshly plucked apple right off the tree." 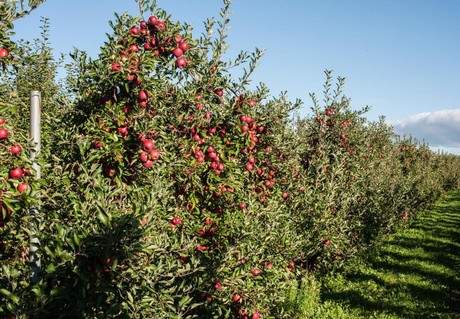 New York's "winterfresh" apple
RubyFrost is a primarily red apple and its flavor has been described as a balance between sweet and tart. It is exclusively grown in New York state and according to Crunch Time Apple Growers, the grower's group has been enjoying a period of growth in demand and a solid increase in production.

"RubyFrost is grown exclusively in New York state by 147 Crunch Time growers," Montedoro shared. "We have experienced significant growth in production this year, with roughly 50,000 more bushels over the 2017 season. Demand has been exceptional. RubyFrost has a tribe of fans who love our apple for fresh eating and prefer as the ultimate baking apple."

Montedoro added that the apple is available across the US, as well as a handful of overseas markets. "We are sold coast to coast in big box stores, premium retail chains and boutique markets," she said. "RubyFrost is also available at farm stands in the fall. In addition, we are sold in Israel and are anticipating distribution in Canada this season." 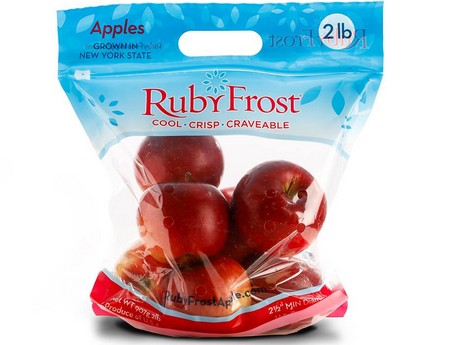 Promotions ready
Being one of the feature apples in the Crunch Time Apple Growers lineup, the company has prepared promotional materials for RubyFrost for the duration of the season, including different packaging options and POS materials.

"RubyFrost is available in a 12/2 Pouch, 5lb polybag, and of course bulk," Montedoro explained. "We provide high graphic bins and POS materials as well. We have several online promotions coming up including our 'Sweetheart of a Deal' for February and our popular 'Baker's Little Helper'. Last year this promotion realized upwards growth in social followers of 13.5 percent across Facebook, Twitter, Pinterest and Instagram. The campaign generated 11,900 entries from 3370 people, and over 15,000 visits to the RubyFrost website. RubyFrost’s Twitter audience grew 248 percent and the Pinterest audience grew 24 percent. This promotion generated a host of fun fan photos in the kitchen and conversations between RubyFrost fans sharing their family recipes and pictures of their favorite baker’s helpers. RubyFrost is the apple you reach for everyday!"