It’s a very hot and dry summer in the north of South Africa and the mango season has kicked off about two weeks earlier at Bavaria Fruit Estate, near Hoedspruit in Limpopo Province. Sunburn has proved a problem under these conditions, expected to reduce the volumes to the fresh market, but buoying their drying activities.

Tommy Atkins mangoes are currently harvested, until the second or third week of the new year. There will be some overlap with the Westfalia Shelly cultivar, followed by Kent coming in from week 3. The season could end earlier, because of the heat, by around mid-March with Keitt and the very late, green Brooks.

Potential for growth in mango exports to India
Some tree-ripened mangoes have been flown out to India and Russia last year, and Europe, particularly Germany might also be a potential market for ready to eat mango. India, with its great love of mangoes and a growing middle class, has been identified as a market with good potential and the local industry is looking at cultivars for the specific taste requirements of the Indian consumer: fruit with a note of turpentine, which is different from the sweet, soft taste of the mostly Florida-developed cultivars grown in South Africa. 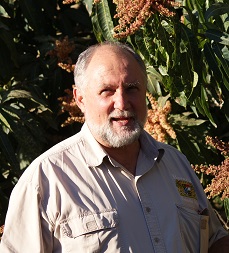 In Russia fresh mangoes from the warm climes of Africa are alluring to customers in sub-zero temperatures, despite the price of air freight fruit, and Johann says many of their Russian exports end up in smoothies at pop-up stalls in supermarkets.

Supply gap in Europe
By necessity mangoes for sea freight can’t be picked at the same level of ripeness, to ensure good shelf life after the 28-day journey. Currently some fruit is being packed for Europe and the Middle East (Dubai and the Emirates), where there is a small early window for South African mangoes this season as the South American season ran into some difficulties with excessive rain in Brazil and some strikes in Peru.

The fresh-cut sector in the UK takes larger counts (6s and 7s), and they also deliver to Blue Skies.

Shelly mango for better eating experience
The Shelly mango, a mango with a small seed and no fibres, is a cultivar with which they would like to raise the bar of mango standards on the local market. A group of mango growers are growing the cultivar under license from Westfalia, which also manages the mango exports of Bavaria Fruit Estate.

“We want to pick the fruit at a riper and more coloured stage to provide the consumer with a better eating experience. It is possible because of the very good shelf life of this cultivar,” Johann says. “We’re currently working out quality specifications for what we would market as a top-class Shelly. We’re in negotiations with retailers to see whether there is a premium to be had on a Shelly mango and to launch an exclusive mango brand at some point in the future, something that up to now hasn’t happened in South Africa. This season we’re focusing on the domestic market. Shelly mangoes will be coming in from around the first or second week of the new year until about week 5 or 6.” 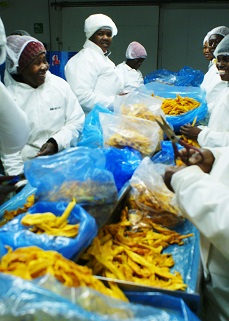 The high incidence of sunburn means more mangoes for drying (the juice market is in the doldrums, with a roll-over of supplies from last year and quotas from juice factories down by about a third).

Bavaria Fruit Estate has its own drying facility, where they aim to produce between 450 and 500 tonnes of dried mango this year, of which around 80% is already spoken for. The ratio between fresh and dried mango is 1:12, so their estimate would require 5,500 to 6,000 tonnes of fresh mango.

About half of their dried mangoes are for bulk export, to France for instance, where the fruit are rehydrated to become intermediate moisture fruit (IMF) and to dried fruit and nut suppliers in Italy and the UK, among others.

Johann notes that South Africa is increasingly competitive in the dried mango sector, particularly with regards to West Africa, where raw product is becoming more expensive, although Ghanaian drying plants have started sourcing mangoes from small growers in neighbouring countries like Côte d’Ivoire, which could complicate the required traceability of suppliers. Kenya is also looking to enter the industry but use of the right cultivars is important: Tommy Atkins, for instance, has flesh which is too orange. It dries to a dark-coloured product, which the consumer assumes to be old.

“Dried mango is an expensive product and therefore consumers aren’t terribly adventurous. Kent and Keitt have a lighter yellow flesh more suitable to drying. There is a bit of an art to drying mango and we’re continually fine-tuning our processes in terms of heat and moisture management.”