Green pepper prices through the roof because of heatwave & sunburn damage 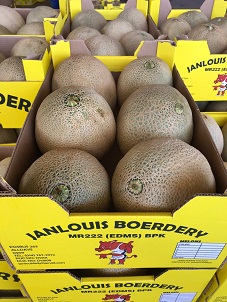 “It’s been a tough year but it’s been a better year than 2017,” concludes Tinus Venter of Janlouis Boerdery, by the Mogalakwena River in Limpopo Province, on the doorstep of Botswana.

The river has been dry for eleven months, but over a week in the beginning of December they received 70mm and in the veld, trees are growing leaves and grass is sprouting, to the relief of the abundant wild animals on their farm.

It is a farm with many interdependent facets: this year, for instance, the success of their quick, season-opening watermelon campaign gave them the margin to feed their antelope, struggling in the drought. Getting a watermelon harvest so soon after winter is a big risk, and difficult in terms of yield, sizing and water management, but one which paid off this year. 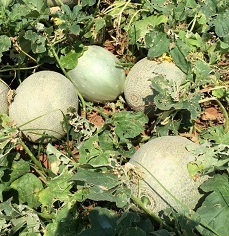 On their two near-continuous lines, sweet peppers and melons, the market has started picking up.

During October and the start of November the melon market wouldn’t take sizes 9 or even 8, only larger sizes (6s and 7s). Now they’re even sending size 10s, in which the market normally isn’t interested. The enterprise sends produce until Christmas, when some other melon farmers have already stopped delivering, and in the run-up to the holidays demand and price improve.

Janlouis Boerdery sends all their melons to the Pretoria and Johannesburg fresh produce markets (apart from their supermarket programmes) where exporters procure significant amounts of their fruit for markets like Mauritius, Dubai and also the Democratic Republic of the Congo.

He has even been sent a screen shot of their melon box behind Jamie Oliver in his Naked Chef series.

“An unbelievable amount of our melons are sent to Mauritius, but we don’t handle the export side of things. Our production is GlobalG.A.P certified but not our pack store, so we can only pack for the domestic market. We’ve had so many enquiries, particularly from Singapore, for our melons, and we’d be open to an export partnership if the right offer comes along. With the weakening of the South African Rand and the increased minimum wage putting a lot of pressure on our production costs, exports make sense.” 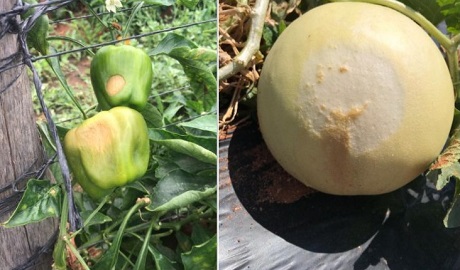 Sunburn on peppers and melons (photos supplied by Tinus Venter) 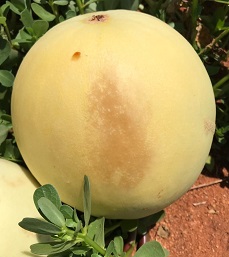 were measured in their area. It caused a lot of sunburn and Tinus recounts how when he cut open a melon straight from the field, one which looked perfectly fine on the outside, the boiling flesh came bubbling out.

Their openland green peppers similarly suffered sunburn, but not the yellow and red peppers under net. “We’d like to get our green peppers also under net,” Tinus says, “every bit of surplus income we put towards erecting netting. There are just so many advantages in terms of water saving and sun intensity and pest pressure.” 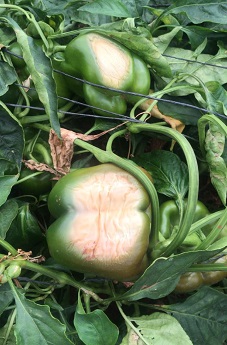 Under excessively hot conditions, openland green peppers easily start to redden and since the market rejects green peppers with a blush, growers are obliged to let those peppers turn completely red, which in turns floods the red pepper market.

In general he notices a growth in the demand for peppers among black consumers, specifically for the green pepper, because usually they are cheaper than yellow and red and they’re more piquant, less sweet.

The farm also produces butternuts from May to the end of August or the beginning of September.

“It’s been a tough year but 2017 was a horror. Yield was low, prices were low, we lost close to 70% of our watermelons to root diseases. This year has again showed us the value of diversification. Butternuts did better than last year and watermelons gave us a boost just when we needed it most.” 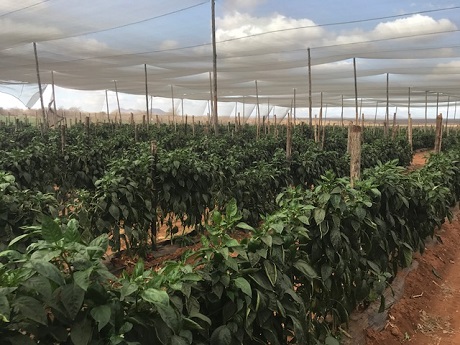