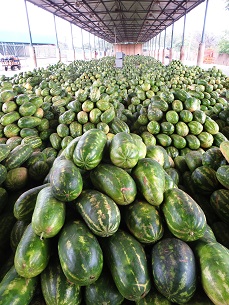 Summertime is watermelon time, particularly in a year as hot and dry as this. It’s been a very good season thus far, according to traders.

The early watermelon season in September started brilliantly for the few watermelon producers prepared to take the risk of getting watermelons ready for market so early.

At the moment, due to heatwave conditions, the market is a bit short on large sizes and jumbos obtain very good wholesale prices at the moment, around R70 (4.3 euros). Ten kg watermelons are getting R45 to R50 on the wholesale market, slightly better than last year’s prices.

Watermelons are sold whole, or cut in quarters or halves, or as part of a fresh-cut fruit salad. Consumers in the north prefer more oblong fruit, it is said, while southern consumers buy smaller, more rounded fruit.

There is still very little demand for seedless or yellow-fleshed watermelons among South African consumers, despite promotional campaigns by major producers in previous seasons.

The heat wave of November has resulted in a lot of fruit with sunburn on the market, as well as fruit abscission on dryland watermelon fields. Watermelon supplies from the Modimolle and Mookgophong areas are down as a result. Supplies from Limpopo Province are currently supplemented by Northern and Eastern Cape watermelons.

Fruit with sunburn was absorbed within a week by the market, says a trader, because no South African Christmas is complete without watermelons.