So-called 'urban', or 'vertical', farms have been making their way into some US cities over the past few years. With limited land in major metropolitan areas, indoor urban farms offer the chance for city stores and restaurants to get their hands on locally-grown produce. Square Roots in Brooklyn, New York, is one of these next generation indoor farms. Located in a former Pfizer factory in the Williamsburg district, the company said one of its main aims is to offer young people careers in agriculture.

"The average age of the American farmer is 58," noted Karsten Ch'ien of Square Roots. "With more young people living in cities, we bought shipping containers into the city because that is where many of them live. Young people are very technology literate, and with the rise in demand for healthy, locally-grown foods, this is the perfect combination for them to get involved in the produce industry. As a result, the average age of our farmers is just 24."

Ch'ien said that Square Roots offers training and skill building as part of helping young farmers establish a firm foundation in the industry. "At the heart of Square Roots is the Next-Gen farmer training program, which creates opportunities for more people to become farmers—and future leaders in urban farming—through a year-long commitment on the Square Roots team." 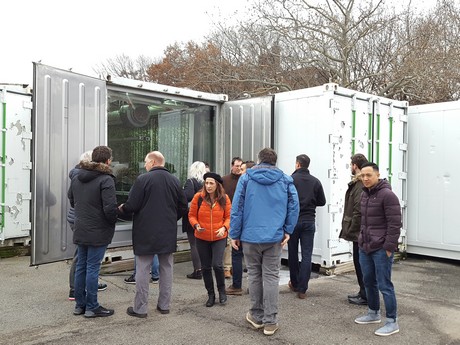 Produce is grown in modified shipping containers. Ch'ien is on the far right.

"Growing in shipping containers requires less upfront capital to establish and maintain," Ch'ien explained. "They are easy to retrofit and move if we need to. Additionally, it's very simple to expand the farm. Instead of remodeling or building an extension, we simply add another shipping container and fit it out in the same manner. Here in the parking lot, we have plenty of room to grow horizontally. At this stage, it's not practical for us to stack containers due to the need for climbing up and down ladders with produce."

According to the company, each shipping container yields between 50 and 70 pounds of produce each week. The containers have been engineered to be environmentally friendly and food safe. "The mineral nutrient system cycles and recycles, so each container only requires eight to ten gallons of water per day. Any kind of food safety issue can be contained in each farm," Ch'ien said. 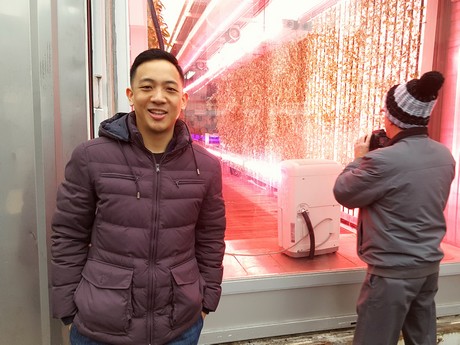 Ch'ien stands in front of one of the farms. This farm is growing sage.

Culinary herbs the focus
Vertical farms still have a way to go to become a mainstream source of produce. Currently, they are typically restricted to leafy greens and other plants that have minimal energy requirements. Square Roots focuses on culinary herbs. The herbs are grown and packed inside the container and then delivered to local independent retailers on one of the company's tricycles.

"Leafy greens are the easiest to grow vertically," Ch'ien observed. "We can also grow things like grape tomatoes and other small vegetables. It really depends on the energy requirements of each plant. Here at Square Roots, we focus on culinary herbs, with each container specializing in a herb. Typically, the timeframe of maturity to harvest is four to six weeks, depending on the herb. We grow in sections and harvest each container twice per week, so that there is always produce that is ready to be picked." 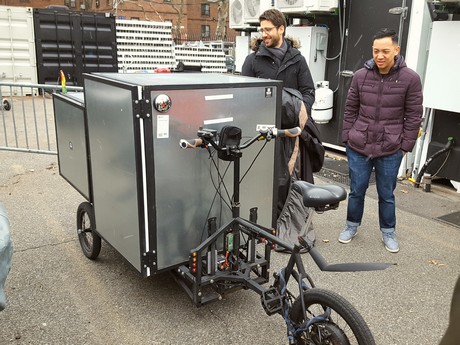 Square Roots uses these tricycles to deliver their produce direct to customers in the NYC area.

Ch'ien notes that growing more energy-intensive commodities such as tomatoes and small root vegetables is not economical at this stage but said that this may soon become viable as technology continues to improve. "Outside of leafy greens and herbs, it's very challenging to grow other crops economically right now. However, technology is improving each year, providing us with increased opportunities to scale and moderate costs. Additionally, we want to ensure we balance sellable yields with quality."