This month, E. Groeneweg & Zn Potato Traders invested in a new Newtec scale/optical sorter combination. "Our old scale did not have much capacity," says John Groeneweg from this company, based in Oudewater, the Netherlands.

"We have actually been hitting the ceiling for more than a year now. Our people had to give it their all to get all the orders out. That is why we decided to make this investment last summer",

Groeneweg needed two suppliers and eventually ended up at the Dutch packaging company, Jasa. "They started working actively on our requirements. They then offered us the optical sorter combination", says John.

"This has actually been on our wish list for years. This machine sorts the potatoes externally, finding defects down to the millimeter. Previously, we had to have a lot of human help with the sorting. This sorting has become much easier", he continues. 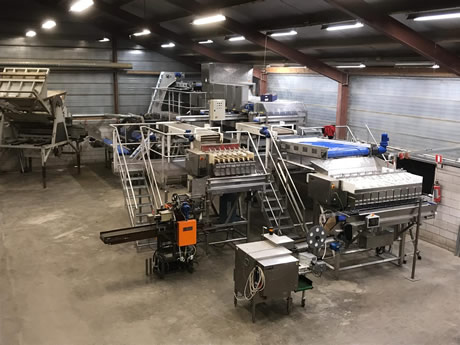 Groeneweg and his staff took care of part of the installation themselves. "We did so on the weekend of 9 and 10 November. On Monday, everything was adjusted, and we started doing test runs", explains John.

"The machine does its job well. We have a nine-cup scale with large cups at our disposal. This means we can also fill heavier weights more easily. This used to be somewhat more cumbersome."

The Groeneweg packing station's capacity has been expanded considerably. The machine was, however, initially purchased purely for their own product stream. "We really bought it to elevate our own product sorting to a new level," he says.

"We have clients in the area and can now have an improved delivery according to their requirements. Perhaps, in the future, there will be other growers for whom we can sort potatoes. However, we initially bought this machine for our own potatoes."

Although this has been an unusual potato season, John is not complaining. "Despite the high potato prices, we have enough work. We can provide our clients with good potatoes. However, we must pay close attention and not get lax."

"It is important that the potatoes work for us. That is our real focal point. As a result, we have been able to make steady growth in recent years. We only have to ensure that the product is sold in top condition. That has become a lot easier with this packing line," John concludes.