Argentina: Onion campaign improves in the south of Buenos Aires

"The campaign improved when compared to the two previous campaigns. The area was limited, the onion's quality was good, and there was a low incidence of soft rottenness compared to other years," stated the INTA (Argentina's National Institute of Agricultural Technology) in a report about onion for the 2018/2019 campaign.

According to data from SENASA, in 2018 Argentina exported 87,345 tons of onion, the report states. 79,059 tons were sent to Brazil and 8,194 to Paraguay. "This volume was relatively low compared to the averages achieved in previous years, which fluctuated around 150,000 tons."

The prices obtained in the south of Buenos Aires fluctuated, but in general the values ​​were higher than in the previous year when the onion from the south of the country was sold. 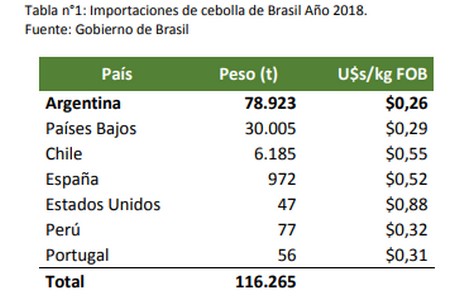 Europe
The report also includes information from other markets. "Europe had the lowest onion harvest since 2006. All countries, except Spain, had lower yields due to weather conditions."

The Netherlands had the biggest decrease in production, as it produced 35% less than in the previous year. Meanwhile, Spain produced 1,431,000 tons; i.e. 10% more than in 2017. "In general, Europe's production is estimated decreased by nearly 15%. As a result of this reduction, onion prices increased by more than 50% over the previous year and stand at 0.30 to 0.40 euro per kilo."

Brazil
According to the report, Brazil has many onion producing areas. In the south of Brazil, production was limited in the first half of the year and producers obtained good prices of up to 2 reais per kilo. "Then, the offer of other producing areas which had a big production, such as Goias, Minas Gerais, and Irece in the northeast of the country, entered the market. Prices plummeted to 0.20 reais per kilo."

However, since the late production of onions has not yet begun (due to climatic problems and the end of this production) the prospect for the campaign is that the supply won't cover the demand.

The proportions planted are the same as in all campaigns, 27% of the onions are of the early variety and 73% of them are of late varieties. "In general, high input prices make it difficult for producers to achieve the productive potential that the different cultivars have. In addition, the water restriction caused by the lower snowfall in the mountain range contributed to reduce the planted area. Some producers might have some water supply problems, depending on the weather in December and January."