As a commodity, the unique winter squash Delicata is finding its footing in terms of supply and demand.

“Delicata supply is still developing. Domestic production areas include California, Michigan and the Northeast, including New York and Massachusetts. A handful of importers also carry the squash from Canada and Mexico. Each year there seems to be slightly more supply and more suppliers,” says Lesley Sykes of The Sykes Co. in Nogales, Ariz. She also notes that the elongated green, orange and yellow-striped squash is typically packed in either bushel or ½ bushel boxes.

Sykes anticipates stable supplies to be available until the end of January. “Traditionally retailers stop carrying Delicata once California and local supply winds down, but that’s changing as supply from Mexico covers the winter and early spring months,” she says. “Greater supply means that end-users can get accustomed to having Delicata available seven to eight months out of the year.”

Consumers developing a taste for it
A steady supply is helping the consumer market grow for the squash. “Generally speaking, a growing number of people across North America have come to learn and appreciate the uses and nutritional benefits of hard squash,” she says. She adds that Delicata is becoming a standard product grocery retailers carry during the fall and winter months and that it’s also become popular with chefs. 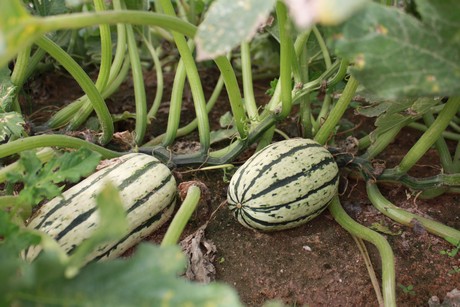 “People seem to like it because it’s easy to prepare due to its small size and thin, edible skin, and it’s pleasantly sweet and smooth-textured,” she says. “However, we’re finding that many consumers are still unaware how to prepare Delicata. Point-of-sale materials that include preparation tips and recipes can help with retail sales.”

Knowing Delicata
Delicata is also a product that sees considerable variation in its coloring and size, and Sykes adds that it’s important that both marketers and handlers throughout the supply chain understand the inherent variation of it.

Meanwhile on pricing, Sykes notes that as with any specialty product relatively new to the market, prices can be radically different depending on the supply and distribution channels in different regions. “Here in Nogales, we are seeing the prices stabilize,” she says, putting Delicata currently at $24.00 to $28.00 for bushels, and $12.00 to $14.00 for ½ bushels.