In May 2017, the first container was received by Cool Port Rotterdam in the Netherlands. In September, the official opening of the prestigious cold store on the south bank of the Port of Rotterdam followed. “Now, more than 16 months later, we’re forced to conclude that we didn’t get off to a flying start due to ADP and different complex factors.” Marco Vermet talks about the delays at the container terminals that affected the cold store and IT that had to be set up. That period is now mostly over, according to him. He’s facing the future positively.

“We expected we’d have to brush up our knowledge a bit, but when things go wrong at the terminals, it also affects the rest of the process. If your own processes, such as IT, also have to be fine-tuned, it all has to be done at the same time, and this resulted in a fairly complex story. It can be compared to a trial run of a boat, but during that first voyage the machine still has to be set up properly, the bridge has to be regulated better and there’s a heavy storm so that the boat is tossed around,” Marco sums up the challenges. The external problems affected the cold store, so that agreements couldn’t always be fulfilled.

Turning out containers using barges
Most of the container terminals in Rotterdam have moved to the Maasvlakte because the boats are becoming ever larger. These sea giants are simply to large to sail into the port. This also created space on the south bank, giving Kloosterboer the opportunity to fulfil a long-cherished dream: building Cool Port. “The location is ideal,” Marco says while pointing to the barge connection on their doorstep, the railway connections in back, and the A15 motorway just a stone’s throw away. “In the past, a lot of fresh produce companies were on the north side of the port, but infrastructure isn’t as good there. Looking at the map, it becomes obvious the core of the port is on the south side,” he explains.

“Because of all of the congestion on the roads, we want to turn out containers using barges,” Marco says. The inland vessel, which can transport between 15 and 150 containers at a time, is a much greener and economical solution than lorries. Lorries only win from barges regarding speed when both modes of transport are to depart at the same time. “Generally, it’s different in practice, because barges get preferential treatment in connection to unloading ocean-going vessels.” After the containers have been unloaded, they’re moved to one of the nearby depots. “We’re also trying to couple import to export, so that a container can be used for export as soon as it’s unloaded.” The flow of import mostly consists of fruit, the flow of export is mostly frozen products such as chips. 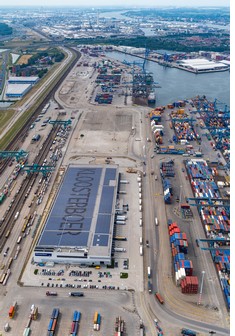 “Interesting concept”
Cool Port has 40,000 pallet places, about a quarter of which has been set up as cold store. The energy for the cooling is generated by solar panels on the roof, among other methods. “We are interesting for all parties, because we’re at a crossroads of a flow of goods. That’s a major advantage compared to other trade centres,” Marco explains. “Trade companies are very interested in the concept, in part because transport costs are lower.” It isn’t just the location in the Port of Rotterdam that’s favourable, Cool Port also offers customers “all-in service.” Marco means, for instance, Customs clearance, inland clearing and KCB quality inspections. “We can do it all,” he says. On the first floor, above the loading docks, Cool Port Packing can be found. This company department packs products as desired by the customer.

Although the nerve centre of the building is at the front, where containers are loaded and unloaded, products are packed and sorted and where offices can be found, the back might be less busy, but it’s no less important. Twenty-four halls, equipped with mobile racks five high and with an in-built transport system: this is where the pallets with the products can be found. “We have the space, but we have to be clever to optimally utilise the space.” Order pickers are guided by a computer screen that limits the number of fork-lift trucks as much as possible.

To increase processing time, signing in lorries has been automated. The transporter announces a lorry, after which the driver presents themselves with a pass at the gate. When the lorry is at the gate, the order pickers are automatically put to work to ready the products. This technique is already much used in other sectors, but it’s new in the fresh produce sector. “We’re really ahead of our time with this in the cooling and freezing sector. In an ideal world we’d speed up the processing times this way, but in practice it turned out to be more stubborn.”

Delays at the terminal
Marco mostly mentions external factors that played their parts since the opening of the cold store. “A lot has changed in the logistics of the Netherlands, so that terminals don’t function optimally,” he explains. Delayed boats, cyber attacks, slow-down actions and strikes at the terminals resulted in delays when unloading containers. The barge, which was to call on multiple terminals to collect various containers, arrived at Cool Port with a delay. On top of that, terminals sometimes have trouble handling the enormous amounts of containers arriving at the same time because of the larger number of ocean giants and alliances of shipping companies. “Because of this increase in scale, the terminals become congested,” Marco explains.

“Because of these external factors that are thwarting us, our warehouse was looked at differently,” Marco says. However, the external factors also affected other logistic parties. “GroentenFruit Huis combined with the Rotterdam Port Authority and other stakeholders started a discussion group that we’re also part of, to prevent these delays and talk to the terminals.” One solution for Cool Port is the point-point connection from the container terminal to Cool Port, which could, however, be further fine-tuned.

While barges loaded containers at multiple terminals in the past, that connection has now been converted into a direct connection between the terminals and Cool Port. In the original plans, more than 95 per cent of the containers would have been transported to Cool Port by barge. “In the early stages we did 40 to 50 per cent via water, we’re now at 75 per cent,” he continues.

Bumpy road
Besides external factors, it also took time to properly adjust internal processes. “A new machine isn’t set up at once,” Marco says. “The road was rather bumpy in the first few months. We had to meet customers’ expectations, but we weren’t always capable of that.” New EDI systems had to be fine-tuned on both sides (customer and Cool Port), pressure on the labour market was felt, and the automatic gate didn’t work as planned. “Transporters have to book slots, but they also had to fine-tune that. In the world of fresh produce, where time is a critical factor, scepticism is quick to rear its head.”

That period is now in the past, Marco emphasises. “We’re working very hard on a continued optimisation, and are therefore now in stabler and smoother waters. We’ve also noticed this from customers who are voicing their confidence in us.” The volumes that are being handled satisfy parties, and the ambition for Cool Port 2 is one step closer because of this.