The Turkish grape season is coming to an end, and the season has appeared to be slightly disappointing. Although the weather has not caused any issues, demand seemed lower than last year, resulting in lower volumes exported to Europe.

For Turkish export company Eren Tarim, the grape season ended with disappointment, even though the season itself went somewhat okay overall, Coskun Eren of Eren Tarim explains: “We hoped for the season to be better honestly. Our main challenge was the lack of demand in Europe compared to last year. I think the economy is going bad in general and people’s purchasing power diminishing affects this industry as well. Especially the months October-November-December, when the overall demand didn’t match our expectations." 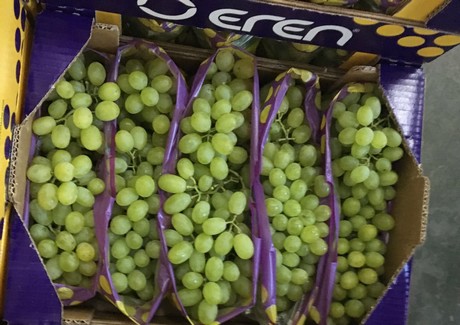 The lack of demand resulted in decrease of volumes exported by about 30%, even though production went okay. The season did start and will end a bit earlier due to the warm weather, but overall production went as expected. And there were a lot of grapes to go around according to Eren: “We do Sultanas Seedless, Red Globe, Superior and Victoria mainly. The varieties range from green, white and red color with seed and without seed. We export these grapes to Poland, Lithuania, Belarus, Czech Republic, Latvia, Russia and England mainly. But some varieties, especially Sultanas and Red Globe can withstand great travel times so you can practically send them anywhere in the world via container as well.”

When it comes to competition, Eren claims the biggest competitors of Turkish growers are in fact other Turkish growers. “Turkish grapes, especially Sultanas are quite unique. Having 22+ brix and being seedless for much lower prices than Italian grapes ensures little competition for similar varieties. Our only real competition seems to come from Turkey itself, meaning our local competitors. The main edge Eren has over our local competition would be our service and our stable product quality as well as offering any kind of packaging; be it carton, wood, plastic or punnet. This puts us very much ahead I would say.”

With the currency of Turkey taking a diving class every now and then, one might expect bigger profits for the exporters but Eren emphasizes this is definitely not the case. “The lira is quite disappointing too, due to people thinking just because the lira goes down, we make extra profit. This actually isn’t true at all. A lot of our costs are related to imports and a lot of the farmers’ costs are also import related. Yes, currently the euro stands 50% higher than last year, but grape prices on the field are also 50% higher, as well as packaging material prices and fertilizer costs. So it basically means the low lira has almost no effect on profits.”

The season for grapes is coming to an end, but Eren will still be providing the produce for the rest of the year: “Prices currently are around 1,20-1,30 EUR/KG. We still have produce available too. Usually grapes can be stored until end of December with ease due to special packaging we do when we store them, called “Winter Packaging” which protects the grapes” Eren explains. Looking at the future, the Turkish exporter is still full of ambition: “Eren is increasing its grape volume almost every year. Our goal is to hit 2000 tons next year. We excel at providing stable programs and consistent quality, which is quite important, especially for supermarket programs for which we get very good feedbacks. We’d also like to increase the contracted volumes for Europe, so we don’t find ourselves in the same situation as we did this year.” 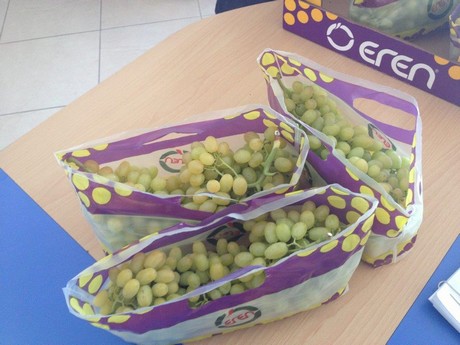 Eren Tarim will also be attending Fruit Logistica 2019 in Berlin. Make sure you visit them at the Turkish pavilion!