Even though domestic supplies of carambola are winding down, supplies remain decent.

“It’s not a large volume of carambola because the winter season is starting to affect the supply,” says Frank Martinez of Homestead, FL based A.R. Produce, who adds that the domestic carambola crop largely hails from the Homestead, Fl. region. “We’re going to have a bit of a gap from about January 15th until May. It’s winter for all of these tropical fruits so that affects volume.”

He notes that overall, the supply is down this season approximately five to 10 percent compared to last year. In May, the new crop then begins and goes until the end of the year. 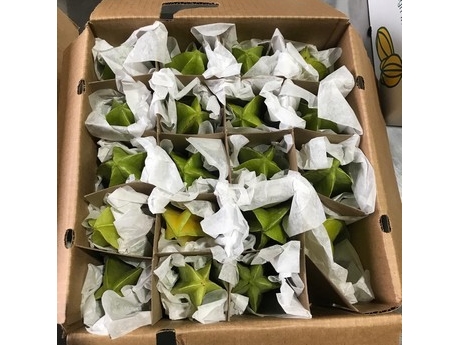 Bigger fruit
With less fruit on the tree, it’s made for larger-sized fruit as well this season. “Large fruit comes with the low volumes,” says Martinez. “It happens with any tropical fruits.” At the same time, he also adds that consumers are also requesting large-sized fruit as well.

With the wind down currently happening, prices are pushing upwards. “A couple of weeks ago we were in the $13-$16 range and right now it’s coming up to the $20s,” he says. “It’ll continue to go up like that and by the end of the year we could be in the $30 market.”

Even demand still
He also notes that prices are similar to pricing at this time last year. “But this product—there’s demand for it. But it’s not a product people will be upset over if they don’t have it,” says Martinez. “We have less volume but you don’t see the changes in prices as much as you would avocados for example.”

That said, overall he’s seen growth in demand for carambola, this year particularly. “There’s also a lot more carambola planted this year in Homestead. It’s not producing yet but that means by next season, we’ll have more. One of my growers has plenty and he’s planting more,” says Martinez.

It seems to be part of a bigger trend of increasing interest in tropical fruits. “It’s across the entire industry. Though it’s especially with the millennials who are eager to try new things,” he says. “We’ve seen more interest with different products like dragon fruit, passionfruit, mangosteens, rambutan. All of these unique products are now in real demand.”