During the year 2017, the offer of asparagus in the Central market of Buenos Aires was 234 tons, which is 34,5% less than the year before. As you can see  in the graph below the supply is in a declining trend over the years. The months with the biggest volumes available were September, October and November. The volume of these months together represent 85% of the total supply in the year 2017.  This was published in the newsletter: Boletín de Frutas y Hortalizas /Convenio INTA-CMCBA numero 85. 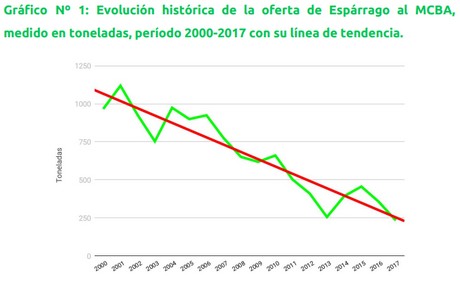 The main producing province in Argentina is San Juan. In the year 2016, the contribution from San Juan represented less than 50% of the total volume. Other producing regions are Buenos Aires, Córdoba, Santa Fe, Corrientes, Catamarca, Mendoza and San Luis. The season is in the Argentina spring, from August to December.

The green asparagus is mostly demanded and consumed in the Argentinian market, but the white and purple varieties are also well known. Argentina has a protocol for fresh asparagus (SAGPyA, 2007), which includes requirements for the positioning of asparagus in the market, including the characteristics the products should have. For example, shape, colour, taste, uniform size and much more.