The Turkish export of fresh produce is developing strongly. The export of fruit and vegetables increases every year. The most important sales market for Turkey is Russia, but Europe also imports more and more. As a result of the warm weather, however, fewer grapes will be available this year. 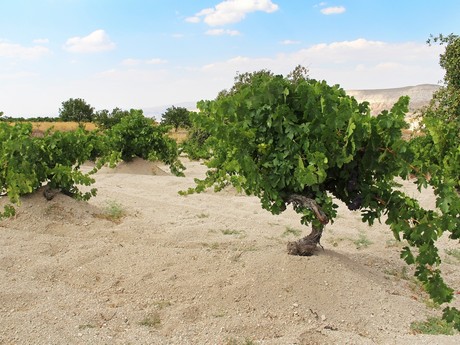 Last year, the export of fruit and vegetables increased by 13 per cent compared to 2016. Turkey’s also hoping to export more again this year. In the first six months of the year, the value of the Turkish export increased to 1,000 million euro, an increase of 23 per cent compared to the same period in 2017. Important export products include greenhouse vegetables, citrus, figs, cherries, quinces, pomegranates and grapes.

Globally, Turkey is the fifth largest producer of the Sultana variety, and they’re in sixth place as the biggest global grape producer. The Aegean region is good for half of the total Turkish grape production. Denizli, in the southwest of Turkey, is also an important production region. Fresh Diamond from Amsterdam, the Netherlands, currently also has Turkish grapes in their range again. “We dealing with a shorter grape season this year. While we normally have Turkish grapes available until mid-December, the season will now be over mid-November. This is the result of the high temperatures and the dry weather. Because of this, fewer grapes meet the correct export quality. We’re receiving about 50 per cent less than normally,” says Güngör Karaarslan of Fresh Diamond. He mentions more grapes are sent to the processing industry this year, mostly for the production of raisins.

Besides the Sultanas, Fresh Diamond also imports other varieties, including Thompson Seedless. The grapes are bought directly from growers in the Denizli and Alasehir regions, and are marketed under the Fresh Diamond, Village or Elizi brands for all sorts of destinations in the Netherlands, Belgium and Germany. Fresh Diamond is specialised in the import and export of fruit and vegetables from Turkey. Additionally, the company also trades watermelons and oranges from Morocco and ginger, garlic and chestnuts from China, among other products. Güngör says the export of Turkish fresh produce to Europe is visibly increasing. “However, the strict requirements regarding the use of pesticides are challenging for the growers. Once this is under control, the position of Turkish fresh produce on the European market will only become stronger.”

The Turkish citrus season started earlier this year. The early start is the result of the favourable weather circumstances. The quality and volumes of the harvest are fine this season. The citrus season lasts until May, but tangerines will finish earlier. The Turkish citrus is being hindered by other suppliers, Spain being the most important competitor. Spain profits from the fact that as an EU member country, they’re exempt from levies, even though the Turkish season lasts longer and prices are generally lower. Last season, Russia was the biggest importer of Turkish citrus, followed by Ukraine and Saudi Arabia.