Demand for ripening systems is high. On the one hand, companies in emerging economies are investing in ripening systems. On the other hand, ripening systems in Europe, still operational after decades of loyal service, are ready to be replaced. The systems now measure more and more accurately. An additional challenge for suppliers: the systems have to be able to communicate with each other. “The techniques are rapidly changing, so we have to work with new techniques that measure more accurately and are easier to operate,” says Jacco Smid of VDH Products.

“Everyone has low-energy systems, but the question is how to guide them,” Jacco says. As a result of EU regulations, a lot of coolants will disappear, and demand for natural coolants is large. A new design of the MC3-SC compressor/condenser regulator can regulate complete cooling installations, which are designed for natural coolants NH3, CO2 and Propane. Combined with the PROBA regulation, we offer a complete system that meets today’s and tomorrow’s requirements. 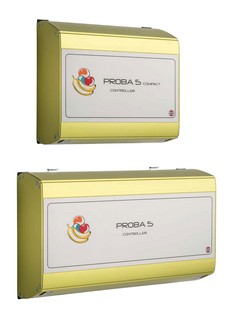 The PROBA 5 is the latest generation of control systems for ripening fruit in ripening chambers, and it’s the most recent addition to the successful PROBA series. The PROBA system that supplies VDH Products is a so-called open system. “Customers no longer want to be dependent on just one supplier/contractor for the systems. We can offer that. Customers are free to do all of the tuning,” Jacco explains. “You can make programmes for bananas, mangoes, papayas or avocados, and many more.” Although it won’t often occur in practice, the ripening recipe can be set up to the minute. “This indicates how precisely our system can be regulated.”

The cooperation and communication between the systems within a company are becoming increasingly important. “Companies want the systems to be able to communicate with each other, that development is very rapid,” Jacco says. “We supply an open system, so the PROBA 5 can easily communicate with other systems, and a company doesn’t have to invest in new software.”

Demand rising globally
International demand for ripening systems is high. “We always make a forecast for how many systems we think we’ll sell in a year, but demand has been crazy in recent years,” Jacco describes the market. Latin America, New Zealand, Russia, China: these are just some examples of markets where interest in ripening systems is increasing.

The internationalisation of the market also means the internet is becoming more important. “For example, when we get a call from South Africa or Peru because they have a question, we can log on from here to see what the customer sees.” From the computer in Roden, the Netherlands, they’re connected to nearly 450 systems globally. “That’s just for the PROBA 4 and 5, because the old PROBA 110 systems don’t have a direct internet connection.” The PROBA system is a stand-alone system, which means each ripening chamber is regulated using a PROBA regulator. “Some systems on the market have ten chambers or one regulator. If the system then breaks down, you’ll have a proper problem.” VDH Products has a global network of agents that can be used to quickly solve any problems that might arise.

Replacing old systems
Not all of the clients are new, outdated systems are also being replaced. “I visited a customer in Ireland recently, and they had a system that was 27 years old but still working,” Jacco explains. “We supply high quality systems, and this just proves that.”

The older, often analog, systems are replaced by new, digital systems more and more. “A regulator from back then cannot be compared to a modern regulator,” he continues. “Customers want to measure more and more. It was easier in the past, but now, in addition to ethylene, RH and temperature, CO2, ozone and oxygen also have to be measured. A lot of sensors are connected to the PROBA regulator, and these sensors have to communicate with each other.”

“Besides very accurate Pt-1000, four-thread sensors for the PROBA regulator, we’re also in an advanced stage for the development of digital sensors, which will be used increasingly often nowadays. Despite measures to prevent disruptions of the signals, ‘old’ sensors sometimes pick up external disruptions. That becomes a thing of the past with the digital sensors. Because of this, measuring becomes even more accurate, and regulation even more precise. The current market isn’t working on that enough yet, but VDH is also in other sectors, and we’ve noticed it’s heading in this direction.”

Providing insight into everything
Due to the enormous demand for electronic components from multinationals such as Apple, Samsung and Tesla, for instance, there’s a global scarcity of electronic components. “Customers aren’t aware of this, but we as manufacturers are dealing with this,” Jacco says. The delivery periods of certain electronic components can sometimes rise up to 99 weeks. “We produce our own circuit boards, and we have large stocks, so that we can continue to deliver quickly. To meet growing demand, we recently decided to purchase a new SMD line, which will be placed next to our current SMD line. This new state-of-the-art SMD line provides us with the capacity needed to continue growing, so that we can produce more efficiently and quicker.”

VDH Products started with the development of ripening regulators more than 30 years ago. The best known banana brand in the world approached the Dutch company to develop a ripening regulator. “That was a system for bananas, but nowadays, the PROBA system is used for many different varieties of tropical fruit. Over the years, we’ve gained a lot of knowledge and we’re in close contact with final users and specialists globally,” Jacco explains. “We’re good at developing measuring and regulating equipment, and we’re aware of the importance of cooperation.” This means the company is glad to talk to companies in the sector to hear about their wishes. “We then also look outside of the chambers,” he continues. A lot of data is gathered in the sector, That starts at the banana plantations in Latin America and lasts all the way up to retail. “All of the data has to provide insights and has to be traceable, that’s very important.”