Apple growers in Ontario enjoyed an excellent growing and harvesting season, thanks to ideal weather conditions. For most varieties, a larger crop materialized, both in volume and in sizing profile, and harvesting finished on time as well.

"We finished harvesting within a day or two of our long-term average," shared Ken Lyons of Blue Mountain Fruit Company in Thornbury. "The timing for our growing seasons and harvests are quite predictable because we are adjacent to Georgian Bay, which has a moderating effect on the local weather. For most varieties, sizes are larger than last year and volume is also larger."

Lyons added that Blue Mountain Fruit Company had installed new irrigation which further enhanced the growing season and resultant crop. "All our orchards are irrigated now so combined with the right mix of sunshine and rainfall, we had a fantastic harvest this year. The entire region is in good shape and we should have good volume right through early summer." 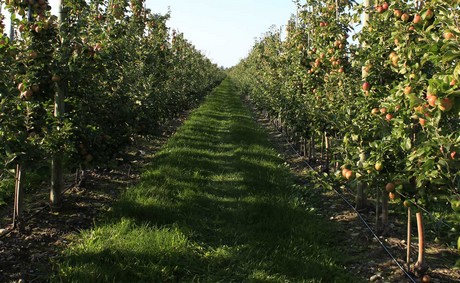 Main varieties in good supply
Ontario produces many of the main varieties that thrive in eastern North America, and this is reflected for Blue Mountain Fruit Company as well. The top three varieties that Blue Mountain sells are Honeycrisp, Ambrosia and Macintosh, although they also sell numerous other varieties in smaller quantities. According to Lyons, the good volume on varieties will help to keep the impressive momentum going that the company has built in recent years.

"At this stage of the season, we are enjoying good volume and promotions on all main varieties," he said. "For us, sales growth has been up in the double digits due to our focus on quality with both the growing and packing. Our goal is to strive for zero rejections. This has an effect on how we look after the trees and our expected volumes each year. This year, the weather has been superb, resulting in the apples having great color, texture and taste." 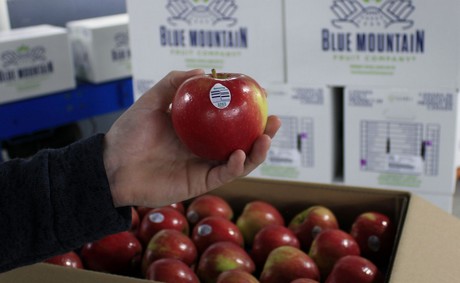 Red Prince apple
Aside from the three main varieties, Blue Mountain Fruit Company also has a special variety called the Red Prince. Lyons said Red Prince was transplanted from Europe in 2001, with Marius and Irma Botden - who brought the apple over from the Netherlands - establishing exclusive growing rights to it in Canada. Blue Mountain make it available each winter after deliberately storing it for several months following the fall harvest, which Lyons says enhances the flavor.

"Red Prince is a ruby red apple, uniform in appearance," he described. "We sustainably grow the apple, harvest in fall and then cellar it until January, releasing it just after Christmas. Red Prince has a unique acid to BRIX ratio, so that when you bite into it, you first get a tangy flavor followed by a sweet finish. The texture of it enables it to hold well through to summer."

He added that an important factor in making it successful is to educate consumers in how it is best used. This is reflected on the way Blue Mountain packs it. "A lot of the money set aside for marketing Red Prince goes into consumer education, trial and awareness," Lyons shared. "As a result, when it is on the shelf, it is the number three best selling apple in Ontario. The popularity has meant growth in the double digits each year for the past four years. We package them in a 2.5lb patented slide lock pouch bag that has a unique, almost hipster design, meshing old world feel in new world packaging. On it, we do a lot of the communication in what the apple does in terms of usage, flavor profile and social responsibility. All this can be ideally combined with unique point-of-sale materials." 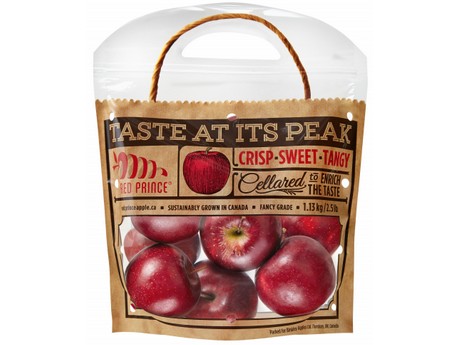 On the back of success in Ontario, the company is expanding the presence of Red Prince, with the apple recently made available in Quebec. And there is more to come. "We have crossed into Quebec and have developed strategic partnerships with growers in Quebec as well as the Annapolis Valley in Nova Scotia. These new orchards will have all the quality controls that Blue Mountain already has in place."

More work needed for marketing and efficiency
Despite the excellent growth that Ontario apple growers have experienced in recent years, this has not been devoid of challenges. One of the main challenges is the amendment of minimum wage laws which has seen the minimum wage rise in Ontario. "There have been issues concerning the legislation for wage increases in the province," Lyons noted. "This has presented a challenge to growers and highlights the need for local packers and producers to find efficiencies wherever they can."

Another important consideration for growers is the need for better marketing. While not a challenge as such, Lyons pointed out that it's vital for apple growers to educate consumers about each apple. According to him, consumers are unfamiliar with how to use the many new apple varieties out now, and this needs to change to ensure long term success.

"Not enough of the marketing budget is used for consumer education," he explained. "Some of the newer apple varieties will struggle if consumers don't know what to do with them or what they taste like. This is especially so for the younger generation that are less aware of the different attributes for each apple."