“Solidarity in the onion trade has been better”

Late in September, J.P. Beemsterboer Food Traders celebrated their 75th anniversary with family and employees. On the occasion of this anniversary, the glossy magazine JPB was introduced. “It was quite a job, I worked on it for four years,” says Peter Beemsterboer about the 178-page book. He officially said goodbye as manager on the anniversary evening. We look back on the company’s onion activities with him. 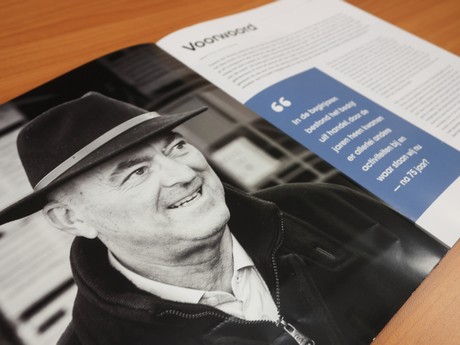 “My father always exported onions in the past, but the export of seeds was much more important to us 30 years ago. In the 1990s, I took up the export to Africa myself, and since then, our onion export activities have been extended considerably,” Peter says. “At the time, that export was primarily sent to Ivory Coast, where we were also part of a local company, and that became a springboard to other African countries. It was definitely pioneering, even though more Dutch exporters, such as Mulder, Minnaard, Valkier and Van Dijk, were active there as well. Back then, we exported 500,000 tonnes of onions, but that volume has increased enormously in recent years.”

“In the past, we had our own sorting company in Marknesse. We later started working with other sorting companies, and we were very happy with this later on. Sorting onions is a completely different branch of sport, and mostly smaller family companies have specialised in this in the Netherlands. They’re working much more directly with the growers, while our specialism is mostly trade,” Peter says. “My father was a pioneer and he had a sensitivity for trade. His headstone therefore says ‘Trade was his life.’ In the early years, our company mostly consisted of trade. Over the years, all sorts of activities were added to that. And what do we do now, after 75 years? Only trade! We’re good at that. It’s in our genes, as it were.”

“In recent years, a lot of competition from sorting companies that started doing their own export arose in Africa, unfortunately. I’m afraid to say they ruined the market. When exporters didn’t have demand from Africa, they didn’t send onions there either, but these exporting packing stations have to keep their sorting companies going and forget to calculate their export margins, which is necessary because of the risks. I truly see the sorting capacity that’s too large as a danger for the Dutch export. It won’t be easy for sorting companies to earn their money this year either.”

Last year, J.P.Beemsterboer Food Traders started a project to grow onions on an area of 100 hectares in Notto Diobass, in Senegal. “We’ve been working on this for a while, and we had already been working on local production in Mauritania and Mali. In the end, we chose Senegal. The Senegalese like onions, because the average consumption per head of the population is between 27 and 30 kilos per year, and the population is growing. However, we noticed that the local government was protecting their own production more and more by implementing import quotes and closing the borders temporarily. But we’re a commercial business, and we’re hoping to continue to trade this way,” Peter explains. “The Netherlands might be the most efficient country for the export of onions, that means nothing if the onions aren’t allowed in the country. We’re trying to avoid import restrictions this way.”

That doesn’t mean the production is easy in Senegal. “It was a leap in the dark, and you’re faced with things you didn’t anticipate. Farmers don’t have the right manure, have never heard of rotation production and don’t treat the product properly after the harvest. Storage is still very much in its infancy as well. We’re now working hard on educating the local growers, so that they can also produce for us. They naturally have different onion varieties with a different shelf life, but we’re doing our best to extend the production window.”

Peter still cares about the situation in the onion-trading Netherlands. “The solidarity in trade has been better. People have been operating more sharply again in recent years, and no one grants anyone else anything. I truly hope that people stop begrudging one another the profits again,” Peter says. “We’re not dependent on onions. In volume, potatoes and onions are still our biggest products, but our assortment has been expanded considerably in recent years, and potatoes and onions now account for about half our turnover, money-wise.”

When asked what Peter will miss most about trade, he answers: “The excitement of the trade! I wasn’t that involved in the daily activities anymore in recent years, but the trade always fascinated me. Besides, I’m proud of what our son Jan did as the third generation. We truly built something together. In the past, I was the son of Jan Beemsterboer for our relations, now I’m the father of Jan Beemsterboer!”