Growers of specialty greenhouse vegetables such as slicer cucumbers and heirloom tomatoes are preparing for increased production from Mexico from January. Volume is already starting in many regions and in about a month, this will markedly increase. Supplies of these greenhouse vegetables have been lower in recent weeks as there has been a gap in seasons.

"We are just about to start ramping up our Mexican production," shared Jonathan Gonzales of Terra Bella Farms. "Several greenhouses in Central Mexico will be in production over the winter months. Supplies on everything were really low at the beginning of November, but from January we expect significant increases on volume."

Gonzales said that hurricanes during the fall months did affect some vegetable production, but the upcoming greenhouse production is facing few issues. "There was a hurricane in Baja a couple of months ago," he recalled. "However, overall everything seems much more stable now, growers have replanted and we are on track."

Persian cucumber market steady, slicers down
Terra Bella Farms focuses on supplying the market with specialty, rather than mainstream, varieties of greenhouse produce. Some of these include Persian as well as slicer cucumbers, zucchini, and heirloom tomatoes. Gonzales noted that the market for slicers has been down in recent weeks, while the Persian cucumber market remains steady. 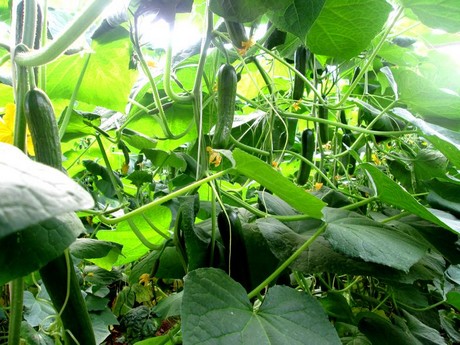 "The price on Persian cucumbers has been steady, remaining at $12 depending on whether they are fancy, or extra-fancy," he said. "Slicer cucumber prices on the other hand, are going down. There is good demand though for Persian cucumbers."

Expansion in the works
Greenhouse cucumbers generally seem to be a draw for consumers, with Terra Bella saying they are expanding this category. One of their primary focuses though is on heirloom tomatoes, with the company supplying several different colors and types. The next step for them will be bell peppers.

"When it comes to tomatoes, we are not going to compete with Romas and beefsteak tomatoes, rather we will be sticking with heirlooms which are enjoying steady demand," Gonzales shared. "Currently, we are looking into expanding into more varieties of cucumbers and we are also getting close to starting our own production of bell peppers."