Can varietal selection help us have a more sustainable agriculture?

According to a French study published in 2016, 79% of French people believe that food can harm their health, and 93% of them believe that the presence of pesticides in their food has an impact on their health. This indicates that people are aware they should eat healthier food.

"Currently, organic agricultural products only account for 5% of the products in French supermarkets, and the development of this sector is largely limited by its high prices. In this context, an organization of French producers created the Residue 0, or 0 pesticide-residues brand, which was launched in April 2017, and officially on February 7th at Fruit Logistics," stated Thomas Chevaillier, the Technical Director -Commercial of PSB Vegetable production. 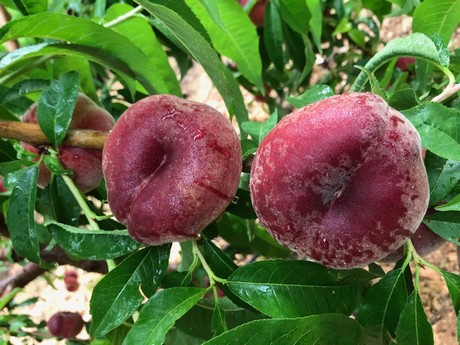 According to Thomas, supermarket chains see these requirements as complementary to the organic farming offer, as they allow increasing the quantity of healthy products they have at a more accessible price. "It allows us farmers to add value to our fruit in a more accessible way, while we transform some of our plots to organic production."

The idea is, therefore, to favor alternative methods and technical optimization that limits the use of chemical products; by, for example:

-Using alternative methods, such as setting up traps and sexual confusion systems to limit the pressures of some insects, to be able to decrease the use of insecticides.

-Favoring mechanical work of soils to limit the use of herbicides.

-Favoring the use of organic fertilizers to fertilize the fields.

"However, after many years of growing fruit we have realized that variety choice is essential in this type of project. Indeed, some varieties have genetic tolerance (direct or indirect) to pathogens. That's why we have decided to focus our work on this matter in recent years. This is perhaps the most important topic of our improvement program," stated Thomas Chevaillier

Tolerance to the Sharka virus in apricots (Plum Pox virus)
"We know all the effects this virus has, the symptoms appear a few days before the harvest (bulges and deformations), making the apricots no longer apt for export, and it can cause tremendous losses for the producer."

"The aphids are vectors of the sharka virus, so controlling the aphid flights can limit the proliferation of the virus. Therefore, if we had a variety that is tolerant, we wouldn't have to perform chemical treatments," stated the expert. "The new range of apricot that is tolerant to PPV, such as Nestor, Domino, Flopria, Bolero, and Agostino, allows limiting the applications of insecticides in highly contaminated areas."

"Nowadays, thanks to molecular markers, we can determine if a variety has a high or low tolerance to the virus," said Thomas.

Tolerance to Monilinia fructicola
Monilinia fructicola is a very aggressive fungus that develops in sweet fruit, especially in nectarines. The main factors for the development of this pathogen are sugars, high humidity and high temperature.

During the months of August, temperatures remain high and there is a good chance there will be untimely rains. The varieties that are harvested at this time tend to have high levels of Brix, so the conditions are perfect for the development of the fungus. Consequently, producers often use fungicides in a preventive or curative manner. 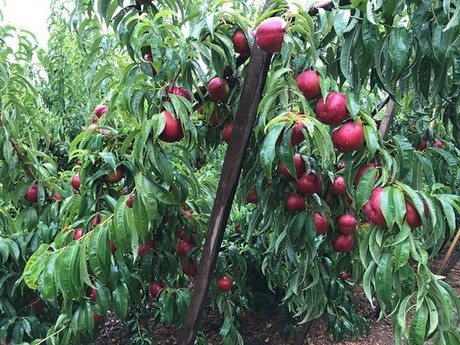 "Observing our varieties in extreme weather conditions, we have noticed that some, such as Tifany (early August) and Kinolea (mid-August), have tolerance to the development of Monilinia Fruticola.These varieties allow us to significantly reduce the use of chemical products," stated Thomas Chevaillier.

"We still haven't identified the molecular markers that allow us to know if the varieties have genetic tolerance. We rely on the incredible work done by our collaborators in Spain (VIVA and VILADEGUT) and the experimental stations of France (CTIFL)," the expert added. In the Paraguayo range, it is essential to choose varieties with perfect closure, such as Samantha, Contessa and Filoe, which limit the proliferation of the same pathogen." 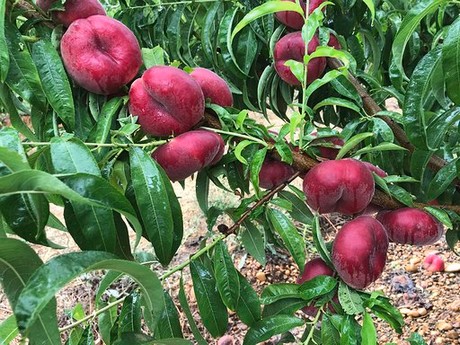 The Filoe variety, at the beginning of August, in Nîmes (France) after a storm.

Tolerance to the Xanthomonas Arboricola pv. Pruni (XAP) bacterium
This bacterium is present in the stone fruit orchards, especially in apricot, nectarine, and peach crops, and it is a real concern for producers. Producers recognize it because of its symptoms, such as spots on the leaves, the tree ends up defoliating until its death. In the fruits, it produces screening and gummosis, which makes the fruits unmarketable. The XAP mainly develops in rainy areas, its spread by wind and by all types of contact. It is uncontrollable, there are different prophylactic measures to limit its spread, but no authorized treatment.

"In fact, all bactericides are prohibited because they leave too much residue and also, all the treatments used so far have not worked. Only copper applications in the fall and late winter have a partially effective result. Copper is authorized in biological cultivation, but it stays in the soil and leads to a decrease in 'healthy' bacterial populations. As breeders, we have focused on this problem, studying our varieties every year in areas of high pressure in XAP to determine which have less sensitivity."

An organization of French producers launched (in November 2017) an action to determine a list of varieties that are not very sensitive to it. The first results are very positive, our Pamela, Filoe, Samantha, and Mombassa varieties show tolerance. We have observed it both in the field and at the genetic level."

"The molecular markers that allow genetically tolerant varieties to be identified are being confirmed, we are currently testing these markers with our full range of stone fruit in order to improve our varietal assessment."

"Varietal innovation is an essential tool at the moment of developing an agrarian project. It helps us face the challenges of the future: producing more products, which are more healthy, respecting the environment and consumers. We are proud to have been on the producer's side for more than 20 years, supporting them and sharing our experiences," concluded Thomas Chevaillier.